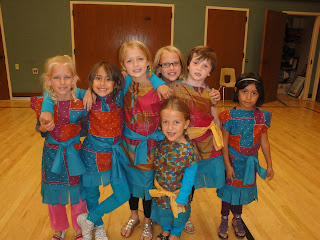 So this week was Road show week! Tuesday night we put on our costumes and had our dress rehearsal.
Here's Ashley with all her single ladies!

I think ours was the only complete family in the road show. Ashley and Taylor were background dancers. Jacob was a son and Jeff and I were Ma and Pa Brady.


Here's Jeff as Malachi complete with beard.
(After the dress rehearsal they nixed the beard because they couldn't see his facial expressions so I painted one of for the play instead ;) 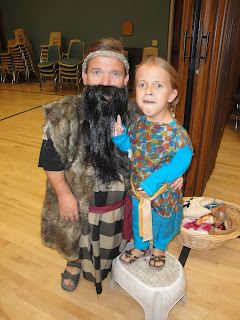 Jacob (Bobby) with his soon to be step sister Cindy...(you can see how excited he is) 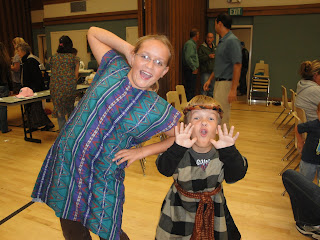 So we got to run through everything twice and finally got a feel for everything coming together. There were still a few bugs but overall it went pretty good.
My critique was that I needed to have more facial expressions and mouth the words for my solo dancing part.  I felt so awkward during that part because I wasn't familiar with it (we'd only gone through it a couple of times) once Holly sent me the music for it I started working on it the rest of the week :) 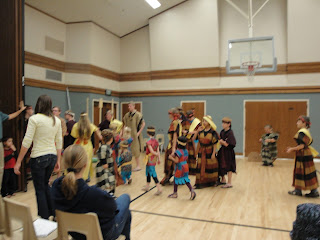 The kids only had school until Wednesday because of Vetran's Day so on Wednesday afternoon I went into Ashley's class to do the art lesson I had to reschedule because of one of Taylor's doctor's appointments.
We painted a color wheel. It was interesting but I think the kids had  a lot of fun. There was a little stray paint on a couple of desks and lots of paint was used...but they got the concept of mixing colors and what it looked like when you had too much of one or the other color. Some of the kids were loving the paint and said they didn't have any paint at home so I was glad to give them a new experience. :)
I'm looking forward to giving them an opportunity to do art projects that they wouldn't normally get to do this year. 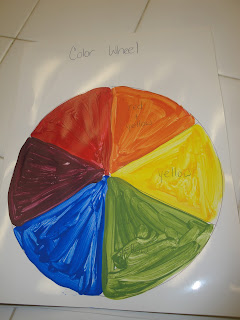 While my paints were out I painted up some bad looking bread for Jeff for the road show. (He's supposed to be a bad cook)
When Taylor got home from school he said "What is that bread??!!??" It looked moldy. Ha ha...he wasn't sure he wanted to touch it until I assured him it was paint. 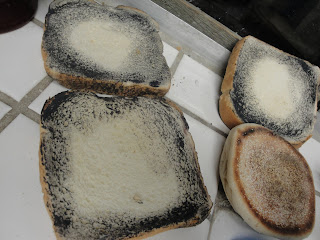 Thursday I had plans to take all the kids to Knotts to use our passes again. Ashley was thrilled to get a call from Jenna's mom to come over and play for the day so she got a whole day of playing with Jenna. (She loved it.)
So I took the boys alone to Knotts. (After dragging Jacob of the couch, he actually wanted to stay home instead!) 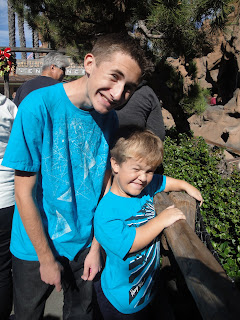 When we got there we were confronted with huge crouds because it was vetrans day all military got in free. So there were lots of families everywhere.
Taylor was smart and said to go to the back of the park first. I just let them go on whatever rides they wanted to. For some reason there wasn't a line for this ride ;) and we got to watch Taylor get right on this.
We loved watching him flip over and over in a random pattern. (he said the operator decides to flip it whenever they want so it's different every time.) 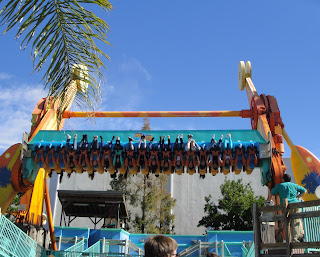 Jacob loves this ride for some reason (you can see the boys on the right) but it makes me sick to my stomach so I just watched and took pictures.
This ride throws your neighbor into you. So I kept seeing them swirl around snuggling. "How cute" I thought. Then they got off and Taylor said "Jacob you're a boulder and you were drooling on me!" 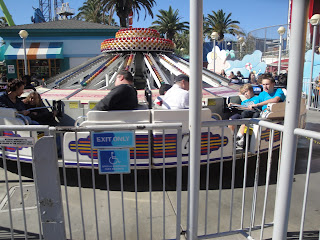 We didn't stay at the park that long we went on a few rides and then they were done before 3:00. On the last ride of the day (waiting for Taylor) Jacob wanted to try garlic fries. They weren't bad but... the whole rest of the day he complained his stomach didn't feel so good..."it was those garlic fries" he said. 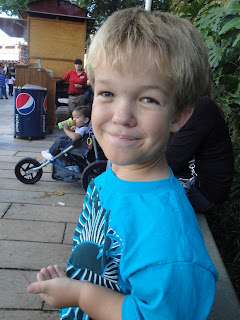 After we got back from Knotts and Ashley got back from Jenna's we all went to the drive in's as a family. We haven't been in a long time so it was a lot of fun. We saw Megamind (better than I thought) and the Owl Movie (about what I thought but the boys watched the whole thing). Somehow we all fit snuggled in the back of the van.
I think the kids thought the best part was the snack bar food...we got carne asada nachos, a hot dog, 2 hamburgers, popcorn, a large drink and two water bottles for under 20 dollars..not bad.
Friday was a sleep in day and a friend day. Ashley played with Mia all day (here they are mashing and juicing berries in the backyard) and Taylor had Josh Troupe(?) over for the afternoon. 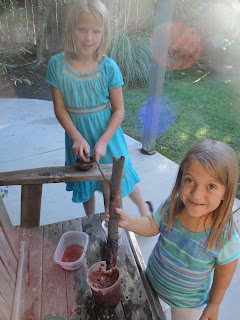 That night it was time for the Road show. We got all costumed up and I painted Jeff's beard as we were walking out the door (and he was talking on the phone)
Here is the cast (Holley the director is on the left) 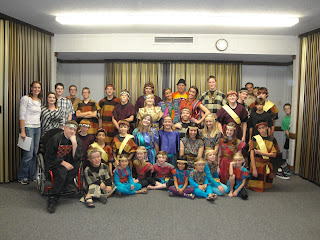 I stole some of Holley's on-stage shots. Here is Jeff and I deciding to put his poles and my tent together to make a "full house" 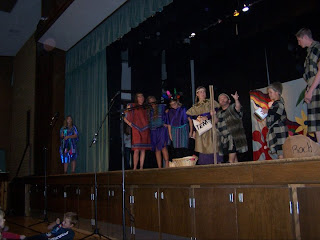 Here's Jeff singing his "I work hard for my money" dance. 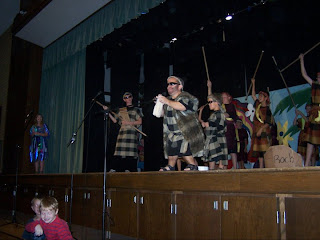 Here's Ashley at the end of her "single ladies" dance. 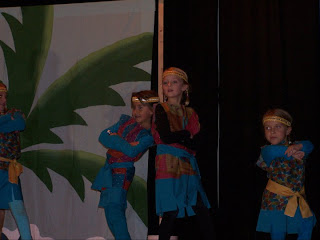 Here's us at the finale with our Brady Bunch square....the girls were supposed to grab the poles for this square but the boys had put them all at the wrong side of the stage so it took almost the whole ending to get the square together. Ha ha. 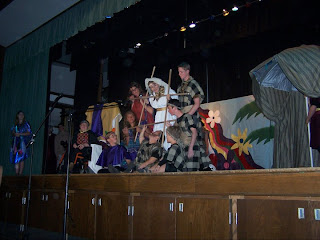 I have to say when we first started practicing we were a little worried but it all turned out and everyone did a great job and we all had fun.
We got tons of positive feedback and I think it was a memorial experience for everyone who was involved! Thanks for everyone's hard work!!
﻿
For Grandma and Grandpa who didn't get to come and see us here is the link for the video of it....
http://www.youtube.com/watch?v=x8ggbFs9O40
Posted by Christine at 9:17 AM

You and Jeff are so good, you should get your SAG cards ;)

You did a great job lip-syncing- the girl behind me kept asking if that was really your voice! It all came together so great!! Maia had a ton of fun with Ashley- thanks for having her over!!

You all did a great job! It was fun to watch.

We left before your ward's performance because the kids were tired and I heard after that it was superb. So, so glad you posted the link!! It was fabulous!! You and Jeff did a great job and I loved your acting and dancing:)! The kids watched it with me and Carter said, "I like Jeff, I really like him." He can be the first member of his fan club:)!