This year we spent Mother's day up in Palmdale at Kenny's new house. I was thrilled that we now have another family member willing to host family events! 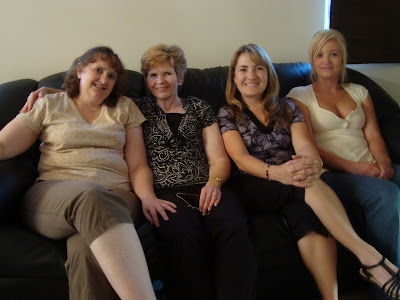 Jeff and I and the kids all went to Dale's ward in the morning and the mother's were showered with hand made chocolates, cookies and a gospel art picture book. I know where I'm going next year for mothers day :)

When we got to Kenny's Steve came out to help us unload the car holding a smoothie cup. I have to admit there was a second I wondered where he had gotten it from. I knew Steve wouldn't go out and buy smoothies for himself on Sunday...
when I got in the house everyone was drinking smoothies. Sarah works at Jamba Juice and had brought smoothies for everyone! 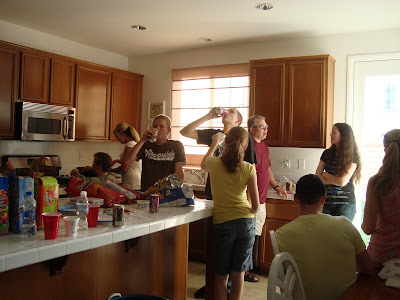 The food was great especially Kenny's carne asada and Steve's first attempt at making brownies. Kenny and Sharon did a great job hosting all of us! Thanks guys it was very nice! 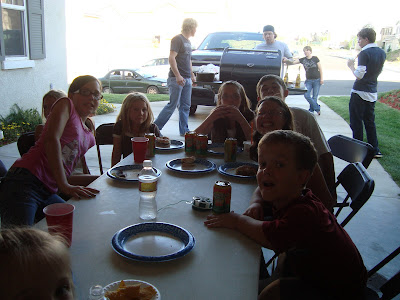 But...before mother's day Jeff and I dropped the kids off at Dale's house on Friday night so they could spend some time with their cousins and Jeff and I could spend some time together belatedly celebrating our 16th anniversary. We stayed at the Ayre's hotel in Manhattan Beach and packed as much as we could in the 30 or so odd hours that we had together. 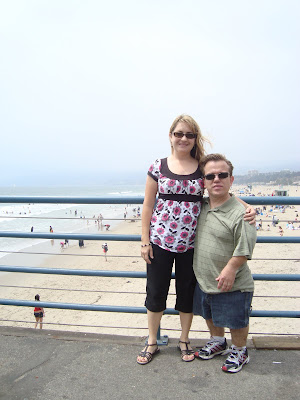 With no definate plans we just hung out and wandered the area. We hit the Redondo beach pier, the Manhattan beach peir and the Santa Monica pier. We got to see Star Trek in an IMAX theater (at $16.00 a pop, ouch), eat dinner at a Calendar's grill (an upscale Marie Calendar's) and buy a wet suit for Taylor at Cosco (so he hopefully will enjoy the beach more this summer:). 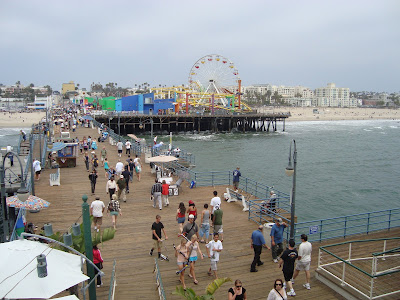 While we at the Santa Monica pier Jeff was willing to let me buy whatever I wanted as we walked by all the stalls but he got off lucky because I wasn't really in the mood to shop. I was even cheap enough to forgo eating lunch at the big barbeque festival that was going on on the beach because it would've cost us $20.00 just to get inside the tent area before we could buy food (it did smell good though).

Being in my cheapo mood we almost missed the aquarium at the start of the pier! Thanks to Jeff we didn't. 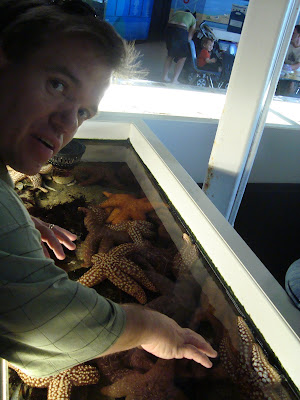 It was only a $2.00 person donation and it was worth it. They had all the local fish and marine life that live in the area we were at. To me it was fun to learn about and see what was under the waves underneath the pier. My favorite was the giant 30 year old lobster that we saw terrorizing and bullying all his tank mates. 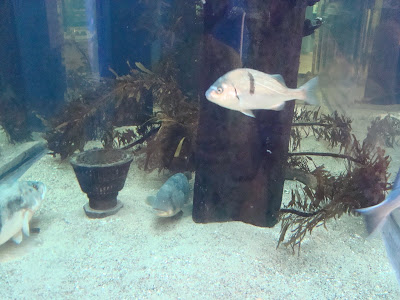 I'll leave this post with a "Mom Moment" from today...

As we were walking out the door for school this morning Jacob called to me from the other room asking me to get the thermometer. I figured it was his attempt at seeing if he was sick enough to stay home from school because I had decided to let Ashley stay home from school so I could take her to the doctor because she was crying about her ear that hurt.

After the themometer beeped I asked Jacob what his temperature was. He told me and it was normal.

Then he asked me "Mom why did you take my temperature?"

"No, I asked you to get the stapler not the thermometer!"
Posted by Christine at 9:18 PM

I'm so glad you got away for a LATE anniversary adventure. (I love those hotels) I'm even more glad that you didn't schedule anything!

Have a great week!

Did you like Star Trek?
I love the Mommy Moment. Thanks for sharing!!

We liked Star Trek a lot. We would reccomend it to anyone trekky or not.

Happy belated Anniversary! Sounds like a fun and relaxing time away. I never knew about the aquarium at the pier...we will have to stop there next time we are in Santa Monica.

Glad you had a nice mothers day! Jeffs mom looks just like she did when we were kids. Hope Taylor likes the wetsuit!!!

Sorry, but that last bit was just too funny! Glad you and Jeff got some time away for your anniversary.

Sounds like a wonderful Mother's Day for a wonderful Mom") Happy Anniversary! Wow, 16 years and you guys are still so cute together. Whenever your family sits next to us at church I nice how you still hold hands I think it is so sweet! Love the "stapler" story that is to funny hehe