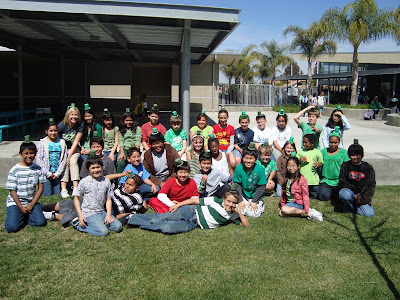 Tuesday was Saint Patrick's day and I was able to help a little with a party in Jacob's class. Mrs. Reese is part Irish and has her birthday the day after St. Patrick's day so she always does a big celebration.

When I came in she already had everything set up and ready to go. 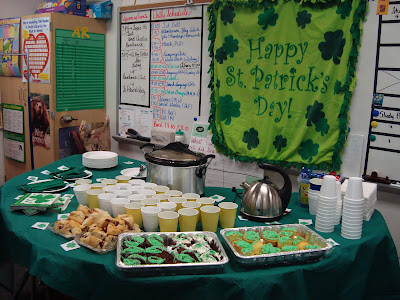 She had the kids make little leprechaun hats as we listened to Irish music. My job was to distribute tape, help when needed and then help paper clip the hat to their heads. Then re-paper clip them when they fell off. And then re-paper clip them again. Some boys had very short hair, I had to have some of them get on their knees because I couldn't reach them and I skewered one boy wearing corn rows (sorry). Surprisingly some of the girls had the hardest time keeping their hat in their hair too. 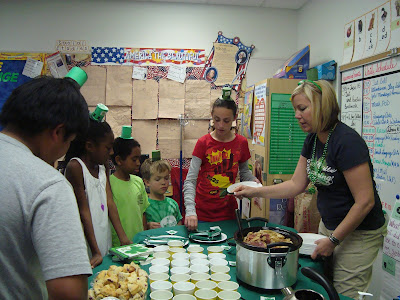 The menu for the day was corned beef and cabbage, scones, green M&M's (so generously bought by the teacher in the M&M store for 12.95 a pound, ouch) She also served herbal tea so the kids could experience it. Jacob was very curious about the tea and since it was herbal I told him it would be fine if he wanted to try it. 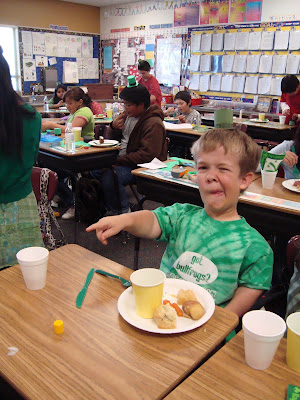 This is what Jacob thought of the tea. Curiosity replaced by disgust. Hee Hee Hee. 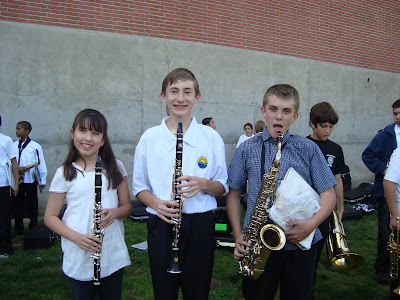 Yesterday I got to go with Taylor to a band competition at Ramona High School. While we were there he wondered if we would see his cousin J.J., we never did but he still had fun. Here is some of his band friends. 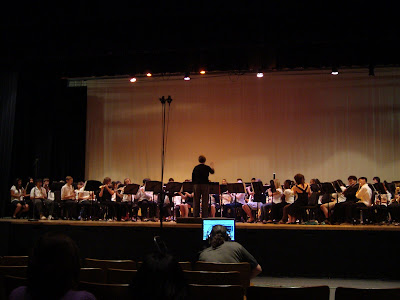 A few parents came and I got to see Taylor perform with his band in the auditorium. Luckily Taylor was sitting on the edge so I could see him the whole time. He's on the left and is the tallest one in the row. They were judged on their performance and then they went over to another room to be tested on their sight reading skills. No parents were allowed in this one so I sat out with a couple of the other parents and talked about high school, the engineering program marching band and stuff like that.

After Taylor came out we found out that his band received a rating of "Excellent" which is one under "Superior". We went over and bought Taylor a pin that he could wear and then I hung out with him a little while he ate lunch. I left him a little early so he could hang out with his friends and I could do a couple of errands. Good thing because when I got home the school called and Ashley was in the office feeling sick.

I brought her home and then I had to get ready for the Relief Society Birthday dinner and celebration that night. Luckily her illness cut out dance class, but I had promised them I would bring our projector but realized that it was in Jeff's car and his car was in the shop. So that afternoon I had to run down and get it from the shop and then get it to the church. Then I rushed home and fed the kids and then ran back over to the church.

Our HFPE committee put on a wonderful evening and a great program. 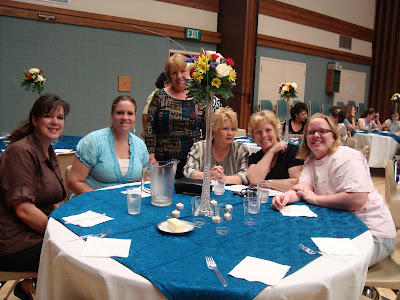 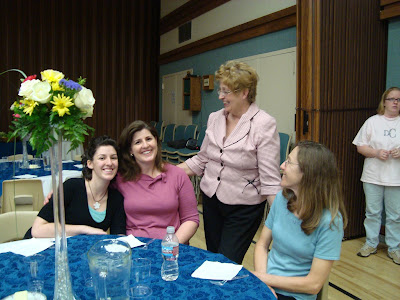 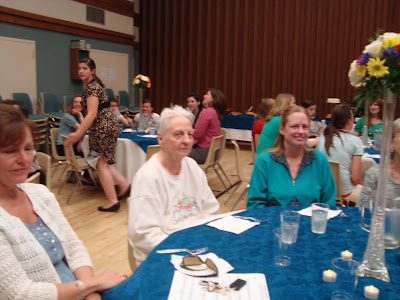 The most important part of the dinner....dessert. 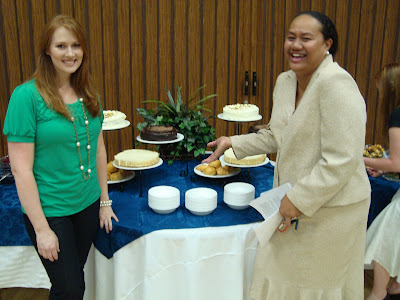 Music was a big part of the program. We had 2 wonderful pianists, a harpist..and the young women sang. We had a variety of speakers and got to get to know people better than we did before. 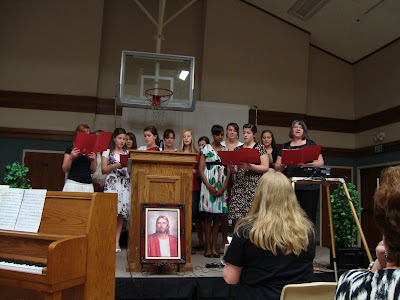 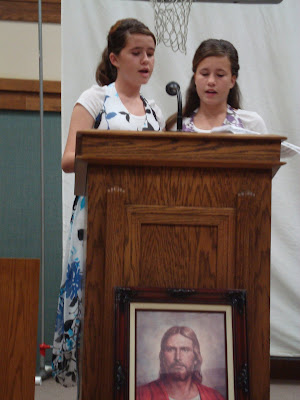 Posted by Christine at 9:23 AM

I'm glad the program turned out well. Sorry I missed it. I will definitely be at the next one. Funny thing about the thermometer. My kids hate getting their temp taken. Your kids crack me up!

Hey!! I hope you don't mind that I was sneaking around and found you!! I can't believe how big your kids are!! What a fun group!!

I asked Matt if he had any idea whether you were at the Smith family reunion in '05. Were you? I thought it'd be funny if we actually met! I love keeping in touch with family through blogs. It's priceless-but not irreplaceable. I had been dating Matt for three weeks when the reunion happened. That's devotion. :) I thought it'd be fun to be different people for different relatives, but it didn't occur to me right away that a reunion meant meeting parents. Oy! Matt didn't meet mine until a week before the wedding.
My mom had that quilt I made until recently when she gave it to me. No, I never thought I'd use it for my own children. Life is so neat!

To answer you ? on my blog... Katie my cousin does Carli's hair (and mine) she does hair in Norco but if you ever had a special event I am sure she would come out and do Ashley's hair for you:)

I LOVE that your teacher let them celebrate St Patty's day! Jeremiah's class didn't do anything and when I asked the room Mom if I could bring something in it was the whole...we can only "x" parties a year... school is so not fun anymore... Jeremiah was sad as Carli's class went all out at preschool.
The RS dinner was great and beautiful... good job!

Hello Beaulieu Bunch-
This is Elder Grays mum. I understand he was transferred from your area today. :( He is still serving in Riverside, but a different part, I guess.
Anywhoo...I just wanted to thank you for watching over him a bit while he was there. He spoke highly of your family and enjoyed the time he spent with you all (even though it was limited).
Again, thanks for supporting the missionaries-it really means a lot to their families at home.
Loves!!
Wendy Gray :)