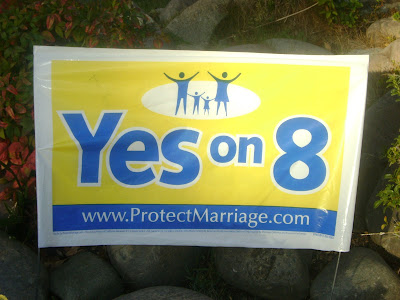 How much do you know about Prop 8?

I have my yard sign out, I have my bumper sticker on (put it on a peel and stick magnet if you don't want it permanently on your car) But when people want to know about prop 8 do you know what to say?

Do people realize that Californians already voted on this same proposition in 2002 and it was passed by a large majority! We voted and it won, so why are we voting again? It was overturned by 4 liberal judges. We are now adding it to our constitution so this can't happen again. If we allow 4 judges to overturn the will of millions of voters, what will happen next?!

I've heard some say that they don't want to interfere with what other people want to do with their lives. Let people do what they want.

Let them know that Proposition 8 will not hurt gays.
In California, the law provides for marriage-related benefits to be given to civil unions and domestic partnerships. Proposition 8 does not diminish these benefits.

We have family members that live a gay lifestyle, this does not affect our love and respect for them as a people. We can love someone while still maintaining and advocating our standards and beliefs. We can have love and tolerance without condoning behavior!

So what's the big deal if prop 8 doesn't pass?

Well unless Proposition 8 passes, California society will soon undergo a profound change in its basic understanding of marriage and family life. This will affect everyone!

The court’s decision will inevitably lead to conflicts with religious liberty and free speech rights. Society will become more and more hostile to traditional beliefs about marriage and family and demand more and more acceptance of nontraditional marriage. Churches and individuals who support, teach and espouse traditional marriages will be targeted for discrimination and bigotry and the law will now be against them!


It will affect our children!

Schools are required to teach about marriage and family life. Failure to pass Proposition 8 will put gay marriage on equal footing with traditional marriage and our children will be taught about both at a young age.

The "no on 8" campaign has claimed that this is a lie. We only have to look at Massachusetts which is the only state in the union who has legalized same-sex marriage to know that this is true. There has already been children as young as 1st and 2nd grade being taught that same sex marriage is normal (have you heard about King and King). PARENTS ARE NOT BEING ALLOWED TO OBJECT, INTERFERE OR EVEN BE INFORMED TO BE ABLE TO PULL THEIR KIDS OUT OF SCHOOL.

If you think it won't happen here, IT'S ALREADY HAPPENING.

The San Fransisco Chronicle reported "SAN FRANCISCO, October 11 – In the same week that the No on 8 campaign launched an ad that labeled as "lies" claims that same-sex marriage would be taught in schools to young children, a first grade class took a school-sponsored trip to a gay wedding. Eighteen first graders traveled to San Francisco City Hall Friday for the wedding of their teacher and her lesbian partner, The San Francisco Chronicle reported. The school sponsored the trip for the students, ages 5 and 6, taking them away from their studies for the same-sex wedding. According to the Yes on 8 campaign, the public school field trip demonstrates that the California Supreme Court's decision to legal same-sex marriage has real consequences."


How can you make a difference? Inform anyone you know about prop 8. Help people make informed decisions about the rights they will be jeopardizing to appease a few.

If you aren't' registered to vote, register. (It's time to stop avoiding jury duty ;)You have until October 20.

Make sure to vote and encourage your friends to vote! 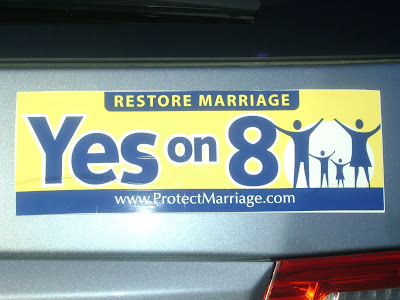 Posted by Christine at 8:40 AM

It makes me sick to think that this won't pass. Thanks for the widget.

I love how you explained your view. Good job. I am already registered as absentee. Prop 8 isn't against people who are gay, it's "for" marriage.

Defining marriage as between one man and one woman is not taking away anyone's rights. The definition simply distinguishes a union which is biologically designed to produce its own children. Whether a married couple has children or not, I feel like this deserves a separate name--even the potential is kind of a miracle.

Equality is especially important when it comes to raising children. Children deserve/need a father and a mother. Neither parent should be marginalized.

Yes, many children are already growing up in single-parent homes. Prop 8 should be a reminder to everyone that as a society we need to assist and strengthen families as much as possible. Really, as a society we should be most concerned with the success and health of our families.