Well the kids are back to school. I think our summer was just long enough to start craving a schedule again. Here's the kids before they left out the door... Not the best picture but the only one I had with all three of them together. 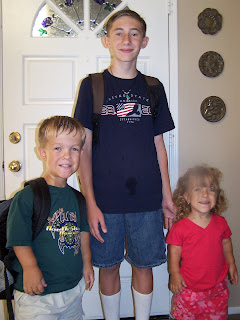 Ashley started 1st grade and loved her teacher. She said that her teacher said "fabulous" all day and she told me that by the end of the day she thought to herself "O.K...that's enough fabulous for one day!" She also told me about the boy that asked her 5 times if she was in 1st grade or preschool. She assured him he was in 1st grade and another boy confirmed it saying that "she was just little, but at least she's bigger than your baby sister." They all agreed and everyone was happy and they moved on...

Jacob came home from 5th grade estatic about his teacher and the fun they were going to have in his class this year. He immediately informed me that I had papers to sign and supplies to buy and PTA to pay for (because they get a party if they sign up 100%of the class). I was reminded of these things repeatedly for the rest of the day.

Taylor is our first to leave elementary school and was off to 7th grade without a look back. He even walked home while talking to me on his cell phone (so he wouldn't get lost) and told me all about it. He loves having different classes and teachers. He told me "If you don't like a subject or you don't like a teacher you only have to put up with it for one hour and then your done!" Clearly a plus in his book. He spent his first lunch sitting next to a kid with a giant Mohawk. He's taking advanced band this year (playing the clarinet), he's in the laptop program and was placed into Algebra instead of the normal pre-algebra that most of his classmates are in. Way to go Taylor. He also loved the fact that he's actually aloud to talk to people in a normal tone of voice during passing period and lunch, what a concept.

Well before we transition completely to Serious Studies I think it's time to look back at some Summer silliness... 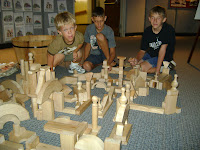 Building a town at the San Bernardino museum. Our last summer outing. 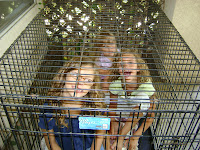 During our 1st 3 hour Relief Society presidency meeting the kids were scared of the dog so they caged themselves instead. 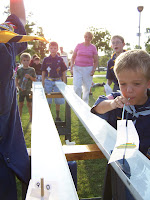 Jacob at the Raingutter Regatta. He won the "best design" award. Way to go Jacob! 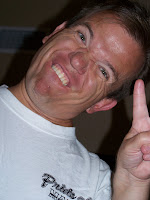 The true Jeff that the rest of the world doesn't see. 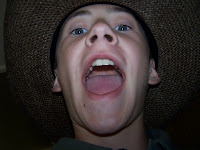 Taylor's inherited a bit of it too. 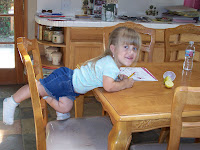 Sounds like school is a success over all...how starnge to have one in middle school:)

They look so nice. We thought Taylor was sporting a new stlye with a faux hawk, then realized that it was the window in your front door.LOL
Enjoy the peace at home.

Okay, we've been out of the ward like 6 months or something and your kids looks like 10 years older I swear (oaky maybe not 10 years, but you get the point)!! What the heck, that is crazy!!

I loved all the pics, and didn't even realize you had taken that dog pic at my house. LOL! Such a crack up!