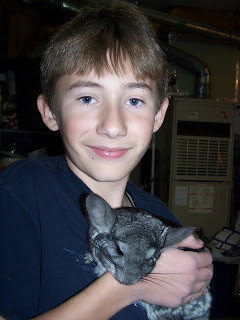 This is Taylor's pet chinchilla, Churro. He's very cute, cuddly and fun to watch bounce around the room. Taylor will let him out every couple of days so he can get exercise. He's learned he has to chinchilla proof the house first however. He can squeeze into tight spaces and hide there like...the stove, behind the fridge, the piano and the dryer. We've spent many times trying to coax him out with a ruler when he's broken free. He also can be a little destructive as we've found. This is what the wall looks like next to Churro's cage. 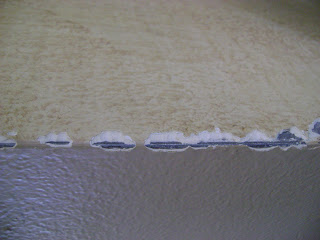 Apparently he takes bites out of the wall when he gets the chance. After a few times of Taylor letting him out of his cage this is what we saw on the ledge he likes to sit on. 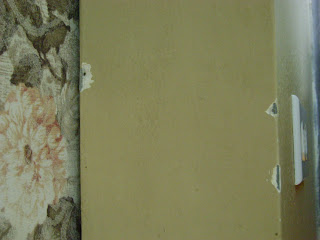 We thought we were doing a pretty good job shooing him away from the ledge but I guess he found a new chew toy. The other day I noticed that we were missing a piece off of the bottom button on the remote control. I figured the kids had dropped it and it broke. Well after the last time that Taylor let Churro out I noticed we were now missing all 3 of the bottom buttons. 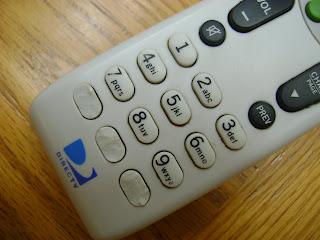 Churro is busted!
Posted by Christine at 3:52 PM

The extra fiber is so good for him! I can't believe he went for the controller though. He's a cutie!

Aren't pets fun!?! Our lovely dog has done wonders with our yard!

Sounds like Taylor is very busy with that snuggable pet. Does buddie and him get along?

Unfortunately Buddy is gone. We had to have him put down last month. He was 16 and not doing to well. When he was here he did fine with Churro. We would let him out with Buddy in the room and he never had a problem!

Chinchillas, like all rodentia, NEED something to chew on. Check on the web or at PetsMart to get advice on getting an appropriate chew toy. It might help.

We love your blog and also Taylor and Jacob's new blog.

Oh he has plenty to chew on. He's just an opportunistic chewer. We let him out and he's in search of new chew toys...

Ooops! Have you thought of getting a lead for him? Apparently you can get them for rabbits, so you might get one to fit!

Having to pet proof your home almost sounds worse then baby proofing...Bryce just started crawling and we have had to start the baby proofing all over again.

We love churro and the marks he left here too. ha ha ha! Take it out of his allowance! :)