March Madness...but nothing to do with basketball

Our family has it's own March Madness that has nothing to do with Basketball.

Jeff is busy at work...like always. He's had some Saturday appointments and late nights. I appreciate that he works hard for us.

Taylor is hitting finals week this week and had a lot of school work leading up to it. He's had a cold so he's struggling to have the energy to pull through his heavy load of work. I am encouraging him to hang tough because he has spring break to look forward to at the end of it!

Ashley has had her cheer banquet, regional cheer competition, she's in the middle of a plant project for Biology (I remember those from when the boys are in school) and she now is in Yearbook and has deadlines coming up with that. She is now mascoting at volleyball games (the last one was over 2 hours) and has national cheer competitions next month. 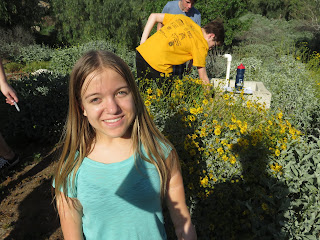 As for me I spoke in Stake Conference last week at the adult session and have been busy with my two callings. The justserve website is picking up and I am making more community connections with it and it's spreading much more than it was last year at this time. It's exciting but keeps me busy too.

I was happy to find out that I passed both of my CSETs (I was almost sure I was going to have to retake one of them since it had a lot of physics math that I didn't study or know how to do). Such a relief. I have one more to go in May.

At the beginning of the month our Stake hosted a sewing day for the Days for Girls organization. It was a great success and it was nice to serve together with women from the whole stake. 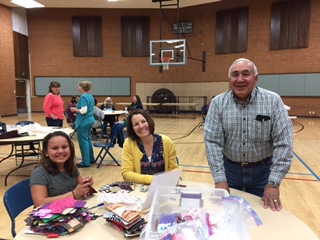 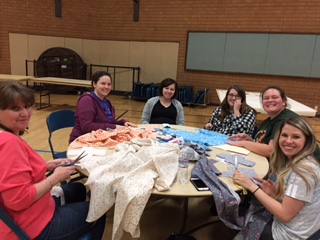 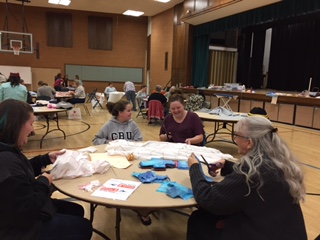 Ashley at her Cheer Banquet.

It's been nice to have friends in cheer with her. These are some great girls! 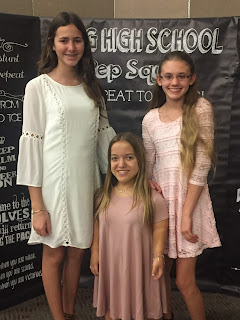 The Mighty Mascots! They are a great group! 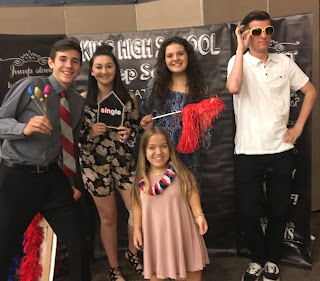 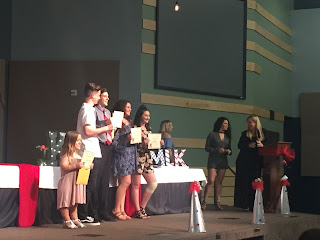 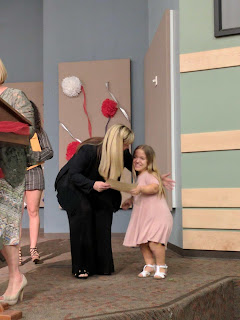 Ashley gets her letter as a freshmen since being a mascot is considered Varsity Cheer. 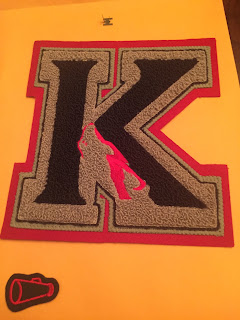 On Saturday we went to Lake Elsinore for a regional Cheer competition. One of the mascots broke her kneecap two days before the competition so one of the former mascots came through and stepped in. They all came over to our house on Wednesday to practice to get the routine down.

They did a great job.

They won first place in their division....

of course they were the only school to perform with mascots...ha ha. 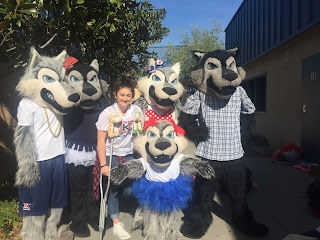 We got to see the other teams and they all did great too. 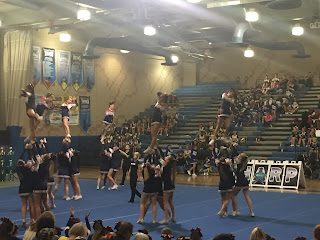 They brought home one of the big trophies for getting the most overall points.

Ashley was happy that our afternoon ended with a trip to In-n-Out too :) 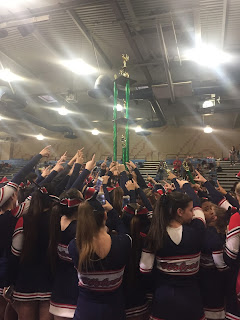 And some letters from Jacob...

Sorry but this'll be a short one today, we had Zone activity!
So before I answer any questions, we had a pretty OK week. But we have a solid person we're teaching who will hopefully be baptized this month! We also got some crazy things coming up. This Saturday and Sunday we get to hear Elder Cook speak! Saturday with the missionaries and Sunday with the 7 stakes of our mission. Then Thursday next week Elder Zeballos (might've spelled that wrong) is coming. And I was asked to play piano for him! Which I was honored but scared lol. But that's not as scary as playing when Elder Cook comes haha. But it's going to be a spiritually power-packed week!
I'll try to answer some questions but I dont have too much time

Oh yeah! And that guy I fed Jello to asked me to give him a blessing out of all the members who came to visit him! I was so touched!
The humid cold is way different than regular cold. In the winter we were walking around in 20° weather and I didn't have a jacket and we were fine! But when it's 40, humid,  and windy, it goes right through you! Jackets don't even help! Luckily I'm full car 👍
I'll just share some things that I've learned so far on my mission! So far my biggest finding is the truthfulness of the basic things we always talk about. It seems like I've had the knowledge about it for a while, but I've been able to come to a better understanding about the simple things!
So for your talk ma, lemme give you a scripture chain
Moses 1:39
John 17:3
Mosiah 5:13
Mosiah 2:17

It sets the stage for how we obtain eternal life, which seems so simple, but yet it's sometimes so difficult to do. And once we truly understand the effects of our service, not just on us but for others, then it will be so much easier to extend out of our comfort zone to reach opportunities we didn't know we're there. But I've seen service on my mission as an aid in many ways. Obviously they get served, and they are usually very thankful so we know it had an effect on them, but it also helps them to see us as true representatives of Jesus Christ. Not trying to sound prideful or anything, but we are out here to find the elect, and the definition of Elect is
1: recognize you as representatives of Jesus Christ
2: keep commitments
So by serving were helping them come one step closer to being converted!

Oh! Another thing I've started to really understand is my purpose as a missionary! Which in a nutshell is teach repentance and baptize converts. So if there's ever anything not fulfilling that purpose, you should not be doing it. We are not here to plant the seeds, nor to grow them. But our job is to harvest. Sure, seeds will be planted by our efforts of finding the elect, but our purpose needs to be centered on finding those who are ready to be baptized and be converted. It took a while for me to understand that, but knowing and understanding my purpose has been one of the biggest helps to me during discouraging times.

Sorry if this sounded scrambled but I'm in a car driving back, and I'm hungry and tired, so it might not make too much sense lol, love yall!
-Elder Beaulieu .

Pictures!
1. Goal: after mission go on masterchef
2. New Zone!
3. Tracting in a lighting storm! I saw purple lightning!
4,5. Animal shelter we serve at, there's puppies and that bird loves to be pet!
6. A family we gave blessings to, and they said we said things in there they were going through and we didn't even know! The priesthood is real! 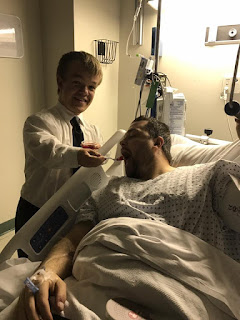 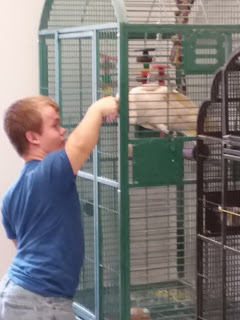 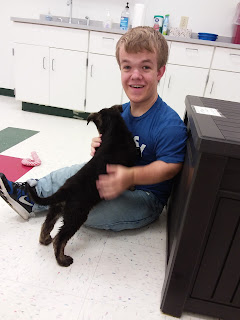 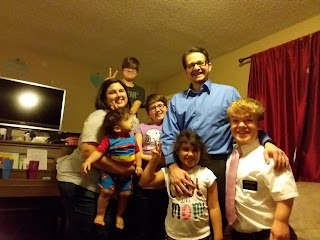 Hello Family!
So this week was pretty amazing! Work wise, it was kinda slow, but we got to end the week with some pretty amazing things!

On Friday, we went on exchanges with the ZL's. I went with the one on the right on both pictures. He's actually from San Diego and another person in that car is from Irvine! So we're probably gonna do something fun post mission. But on the exchange we were able to find a bunch of people in both of the areas when the whole week was dry with the finding, so it was pretty miraculous!

Saturday was the big day. We all carpooled to Elder Cook! We got to Charlotte pretty early, so we thought we'd go blitz an area close by! It was great, and we got a few potentials for those missionaries, but we got kinda lost lol. We almost ended up getting locked out of the meeting, but we didn't so it was all good! Elder Cook was amazing. It was so crazy to get that everything he said is scripture! And his testimony was so powerful! He even told us about his spiritual experiences that he doesn't share with a lot of people. He said something I already knew but hearing him confirm it was so powerful! But that was at the stake center and I sister that came out with me played the piano. Haha she said she was terrified. But I'm playing this Thursday when one of the 70 is coming. Which is kinda terrifying. But also I feel honored!

Sunday we also saw Elder Cook! That was in the big stadium. It was great to hear him again but it wasn't as special, since the first one was specifically for us missionaries. It also snowed that day! It got pretty snowy before we went in, completely foggy. But as soon as we left it was blue skies, and all the snow had melted by the time we got home haha. We also got to go a members house that night, and it's great to see how good relationship I have with the members already!

It was really motivating this week on Friday when the mission was all together, and a lot of people were coming up to me to meet me saying they've heard so much about me! Its so great to see that I'm able to influence so many on the mission! And that's so great that I was able to help you on your talk! That scripture chain I got from my last companion and I thought it would be perfect. And flash drive would be perfect!

This mission has been so great so far, and its so crazy that tomorrow is my 6 month mark! There's been so much I've learned that will help me out for the rest of forever! I love you all and I hope you have a great week!  Elder Beaulieu 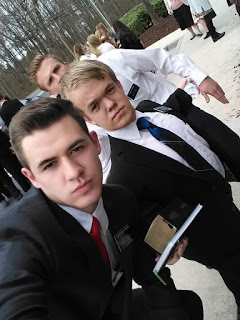 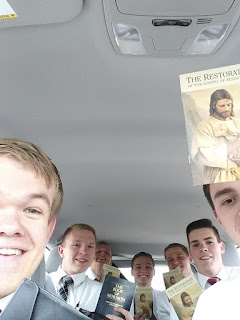 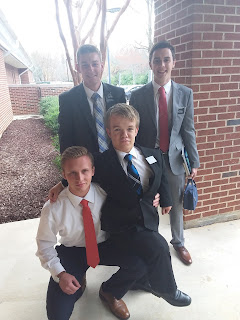 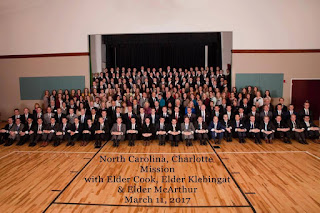 Posted by Christine at 4:09 PM