Taylor's project for the semester for physics was to build a rubber band or mouse trap powered car. How was he supposed to do this??? No instructions, just a couple of guidelines and a link or two to look at on-line. They couldn't use a kit but they could use wheels from something else. To get an A it had to go up to the top of an incline to get extra credit it had to perform in a crash off.

So Taylor and I tried to find materials for his car. We went to Michaels and bought some wood, went to a friend's who had tools and saws and such and had him cut it down and drill holes for the axles. The wheels we pulled from an old Erector set. There was another trip back to the store to get a metal tube to engineer the mousetrap. Some gluing and figuring it out. After 3 days of working on it we realized it didn't work. The car was too heavy for the mousetrap to pull the axle and get the thing to go! It was due the next day and it didn't work!

So Jeff went to the hobby shop, asked for advice and brought home some lightweight balsa wood. When Taylor got home that day, he found out he had to start over again from scratch. We pulled off the wheels that he had glued on the first car and started again.

I have to say this time he finished the car in 3 hours and it was completely his design and he figured out how to put it together. Failure the first time really taught him more than if he would've used a kit. He figured it out and it ended up going up the ramp for an A!

When it came to the tournament it Crashed and lost! Oh Well.

I noticed just the wheels make it home afterwards...I guess he pulled it apart at school and threw it away. After all that work, sheesh! 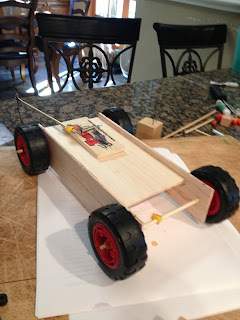 Ashley's science project didn't work out liked it was supposed to but we had to turn her board in anyway....she ended up being enough of a smash that it was picked as one of the top 3 from her class to be judged. Wow!? Luckily she didn't get picked to go on because we would've had to explain how it hadn't really worked very well. 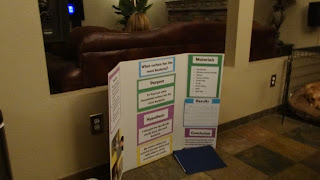 Ashley's birthday always follows Christmas so it's always a scramble after the Christmas stuff is put up to figure out what we were going to do. Since we weren't in the middle of a kitchen remodel (like last year) we decided to do a party at the house. She didn't know what kind of party or what she wanted to do but looking through pinterest for ideas we came across "spa" birthday parties.

So that's what she wanted a "Spa" Birthday.

We got the invitations out on Monday and the party was Saturday! I had a lot of figuring out to do fast. Luckily moms I talked to that week gave me some great ideas that I used to make the party great. 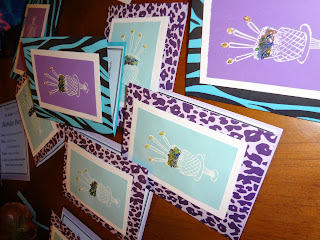 This bad idea was all my fault.

I was cleaning the house the day before the party and I got a knock on the door from a charismatic guy giving me this flyer offering to foam clean one room of my house. Now I know it's a Kirby sales thing but looking at the flyer it seemed like a promising way that I could get the family room clean for the party.

I told him I wasn't in the market for buying a vacuum, "No problem!" he says.
I ask him how long the presentation is?  "It's as short as you want it to be!"...
All my other concerns were answered quickly and I thought it might be a good idea since I have no problem saying no to a salesman. (Because my husband is in sales I see through all their tricks)

When the guy came back later with the Kirby guy I got a little nervous when I saw him unloading all his supplies. I thought I'm going to be here a while. Long story short I sat through more than an hour and a half of "demonstration" and in the end Jeff was home from work, dinner was ready, the boys were going to be late for their cousin's birthday party and all the guy did was fill up a bunch of pads showing me how much dirt was on my floor. His sales tactics didn't sway me and as it got later they started to irritate me. I kept waiting for him to do the promised "cleaning".  Meanwhile I got no housecleaning done and still had a party to get ready for.

After the sales pitch kept going on and on and on we finally pushed him out. And for my "free cleaning" Well, one couch pillow was vacuumed, one step on the stairs was vacuumed, part of my kitchen (because I got to try it out) was vacuumed and one strip in my family room.  He never even vacuumed my whole family room let alone shampooed it!

In fact come to think of it he didn't even HAVE anything that looked like dry foam...but I do remember him mentioning a couple of times that it's not a good idea to shampoo the carpets with all the dirt in them...and that I would have to vacuum with his Kirby vacuum for a couple of weeks to get all the dirt out. (One of multiple bids to buy it) Soo...was that supposed to be his out for not cleaning my carpet???

Anyway all I can say with confidence is NEVER AGAIN! 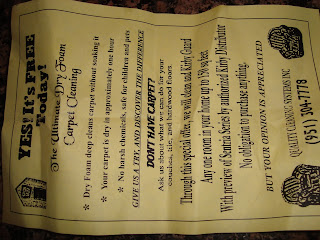 Anyway...on to the party!

Saturday I was running around getting stuff ready and I had the boys set up our Dance Revolution Game we got for Christmas. Yep looks like fun. 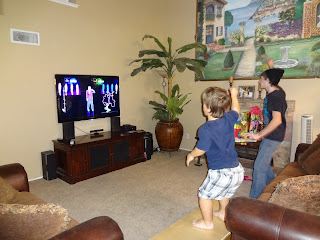 The dance game and the trampoline were good pastimes while the girls were waiting for all the other guests to arrive. 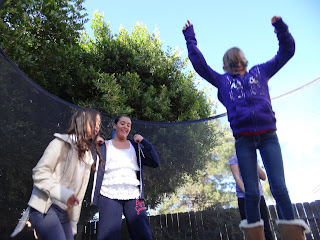 We took an idea off of Pinterest to fill the trampoline with balloons...fun for awhile until everyone started popping them. As Jeff was outside trying to clean them off the trampoline he expressed that he didn't think that this was one of my better ideas as well :) 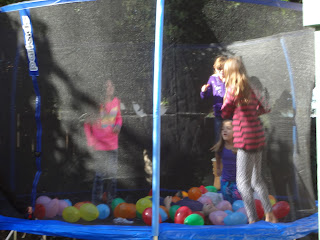 Finally all the girls are here...pizza and snacks for all. 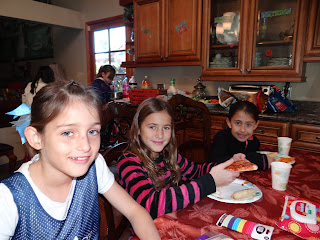 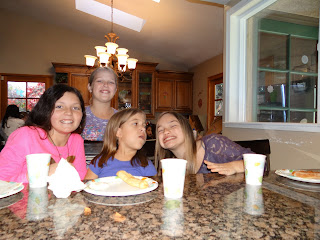 Then on to the Spa portion of the party.

I had stations for the girls to visit, Face, Hair, Feet, Nails and Hands all were set to get a spa treatment.

For our facials we had chocolate, yogurt, lemon, honey masks.

The girls pained themselves... 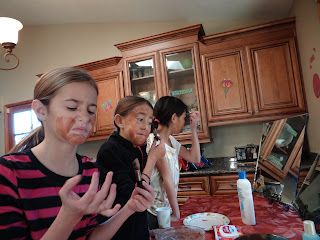 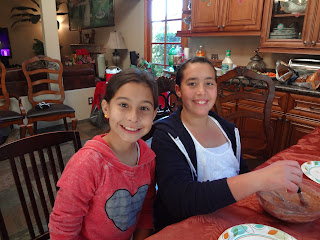 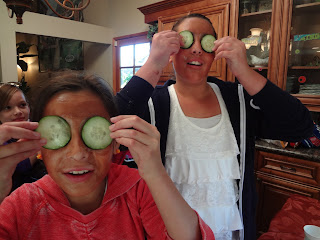 And then went to lie down in the family room (the unshampooed family room) to let their masks dry.

Jeff pumped in "spa music" to listen to while they waited.

Then we washed the masks off, toned and moisturized. 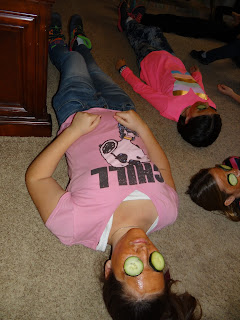 Cousin Jolene was nice enough to come and do the nail station. 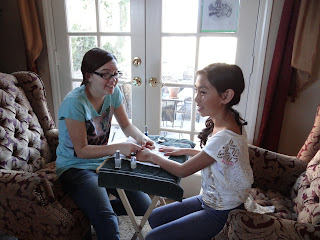 Jenae was rocking it at the hair station and all the girls loved her crimping techniques. 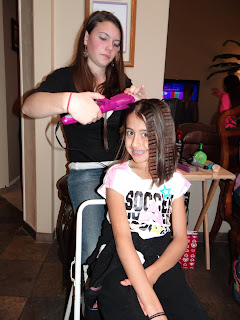 Time for cake and ice-cream! 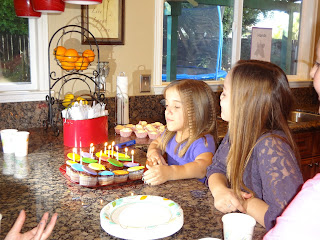 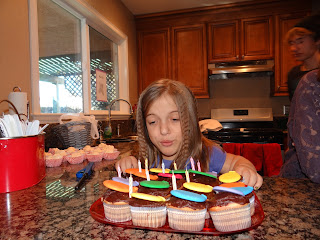 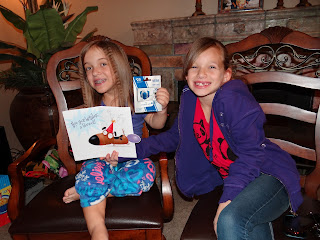 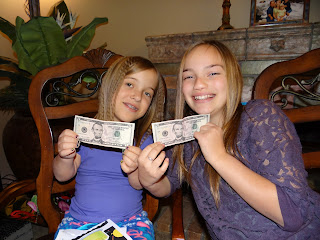 I think Ashley's favorite present was the cotton candy maker she got.   Of course all the girls had to try their hand at making cotton candy.

We kind of couldn't figure it out because the cotton candy kept coming out kind of small and hard. 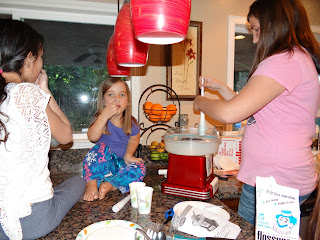 Then Jacob and Taylor figured out the right technique! 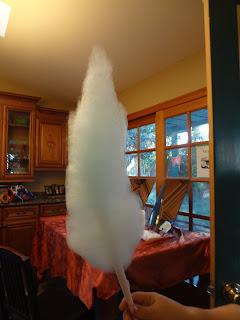 This machine takes crunched up candy  like jolly ranchers, mints and cinnamon disks as well so the kids begged me to get it out on Sunday afternoon and we tried lots of different flavors. Ha ha!

That night Kate got to join Ashley, Jeff and I for a dinner at BJ's along with a birthday pizooki!

I'm thinking you had a good birthday Ashley :) 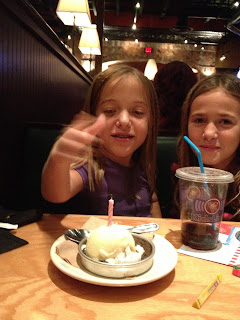 Now this week is finals week for the boys. Unfortunately Ashley was home sick one day and the boys were sick one of the mornings...but since it was finals they were loaded up on ibuprofen and sent to school.

I have started a tradition that I put a little treat and note on their pillow during finals week.


When I was out buying the treats Jeff made sure I included Ashley too.


She was the only one who thanked me without being prompted. I guess the boys haven't learned what to do to ensure that things like this get repeated in the future ;) 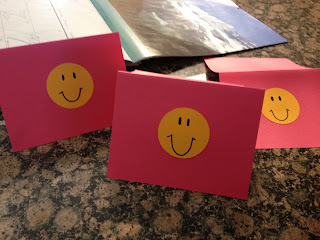 Posted by Christine at 2:01 PM

The spa party is such a cute idea...I'll have to keep it in mind for Claire. I love the balloons on the tramp

I let Kirby people in once, too and I agree, never again!