The last week of school!
Starting off with Memorial Day...we slept in and enjoyed not having to get up early and even missed the motorcycle parade going on practically outside our door being lazy.
We went to the movies and then went to the Nelson's to have a barbeque and hang out with friends. (There was even some swimming for the younger kids) 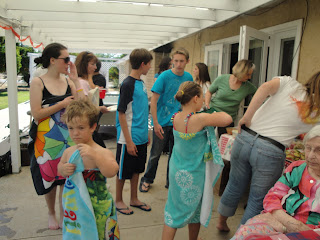 Don't let Jacob's expression fool you he was quite happy to be hanging out with all the teenagers.
Sister Nelson's homemade Tuti Fruity ice cream was a favorite that day. 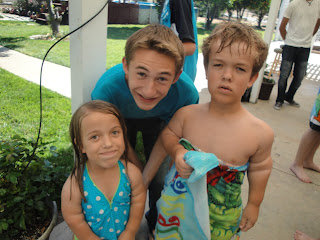 Diet busters left over from the weekend :( 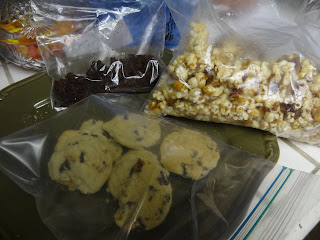 On Tuesday Ashley had a Luau at school and what better than to bring coconut brownies.
I didn't know what her class would think (some kids don't like coconut) but I guess they were pretty much gone....good I didn't need more diet busters around. 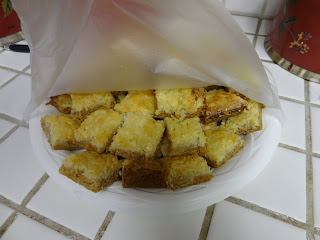 I also was working on these guys for cupcakes that went along with Ashley's "Tidepools" play.
Inspired by my Hello Cupcake book I made these out of laffy taffy to put on the cupcakes. 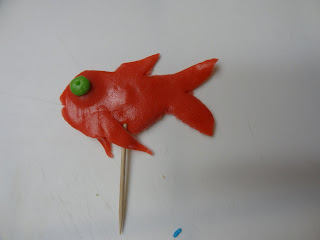 We also make autograph books with the class pictures and I made one of Sharla's clipboards for Mr. Smith for his teacher gift. 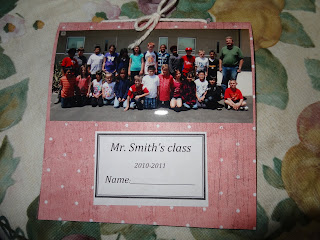 My Tuesday mornings always start out crazy. It's piano day so I'm up at 5:20 making sure that Taylor is awake for his 5:30 lesson. Jacob's lesson is at 6:00 and Ashley"s is at 6:30.
I get Jacob up at 5:40 and Ashley needs to get up at 5:50 so I can make sure she's ready before I drive Taylor to Seminary. When I get back I make lunches and help Jacob and Jeff get out the door at 6:55. Then Taylor gets dropped back off at home to finish getting ready then I drop him off at school at 7:30 and then come back to pick up Ashley to get her to school at 7:50. Whew.

Here is Ashley doing her piano theory that somehow doesn't ever seem to get done until the last minute. 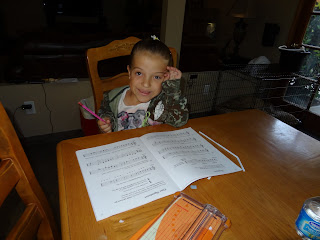 Tuesday was also wash day....or an all day fight with the dog to rescue socks....
You can see Maddie is still wet...on this particular morning I woke up to a horrendous smell and found poo all over Maddie she must have been rolling in it ...before the kids went to school I put Ashley in the shower and we gave Maddie a quick bath.
Ashley was freaking out that Maddie would be in the shower with her with poo on her but I assured he I would be doing the washing she would just help with the rinsing after she was clean ;) 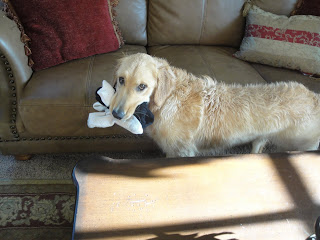 On Tuesday I also had a field trip to Taylor's dresser drawers to show my son how many shirts he DID have (after complaining he didn't have any to wear).
Hmmmm.......look at this one....still has tags on it...
and this one....
and this one....
OK I found like 8 shirts with tags still on them or had never been worn. 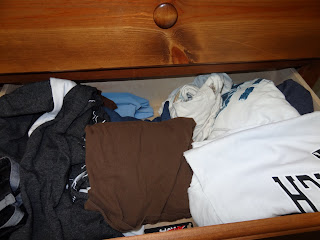 They were all soundly rejected....

"That one has buttons",
I dont' like the material on that one,
That one is a weird color,
I don't have anything to match with that one, (he doesn't believe me that jeans go with anything)
on and on they were all unacceptable for one reason or another. He informed me that he needed to be with me to pick out clothes when I buy them. I then reminded him that for about 1/2 of the rejects he was with me.
One of them became a reject after he wore it to school and someone made a comment on it even though he liked it just fine before that.
Maybe it's time for him to buy his own clothes.
I did consent to buy him 2 plain white T-shirts at Walmart for $4.00 each right before EFY.  He was happy.
Go figure!!! 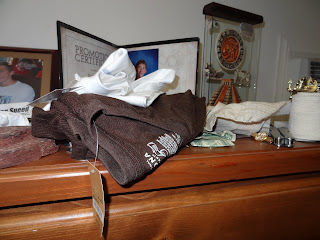 The last week of school Taylor changed backpacks and got an old one out of the garage. I asked him what happened to his old one.
He told me a Capri Sun had spilled in it and now it had a funny smell. He told me (repeatedly) to just throw away his backpack. He said he didn't care about anything that was in it anyway.
So after everyone was at school I went to inspect this backpack.
The Jansport! I wasn't going to just "throw it away" this was the second backpack this year I bought for him and it's supposed to have a 10 year guarantee I'm not going to let a yucky lunch spill scare me into throwing it away! 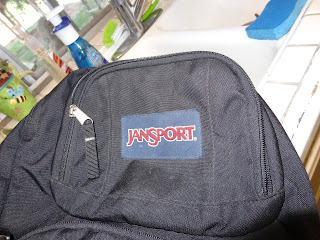 So I dumped out all the stuff he "didn't want" into the sink.
Hmmmm.....his scientific calculator, pens, highlighters rulers and a couple of flash drives! 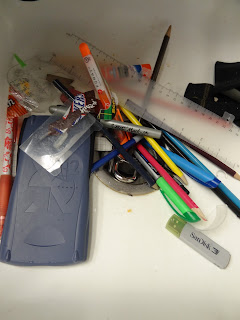 Here is the juicy, stinky culprit!
I ended up throwing the whole backpack in the washing machine (didn't dry it though) and it's all good now. 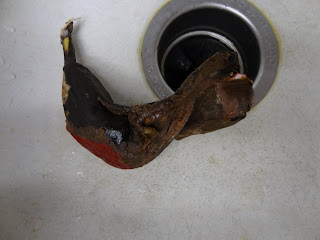 Tuesday night was Justin Beaulieu's graduation at Ramona.
We've had an opportunity to go to a lot of graduations at Ramona...so far this is the 4th one for Steve's family! 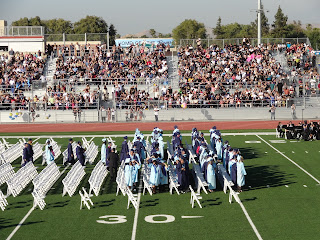 We had a great time in the stands while the graduation was going on.
Jacob snuggling Caden. 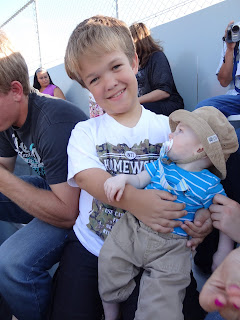 Grandma loving on Olive.
She let all of us hold her :) and I loved feeding her snacks. 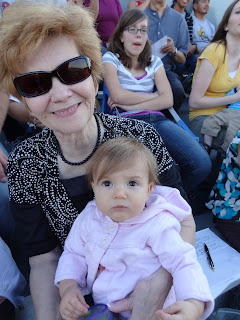 Here's my panoramic shot of the graduation.....
that just looks little :(....
First time I've used this maybe a print would look better...

Hard to see but Justin is getting his diploma here. 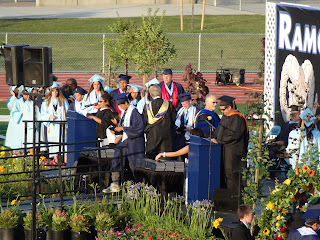 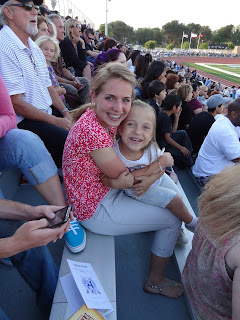 Snacks to share also helped keep everyone happy despite the fact the airhorns around us were really annoying. 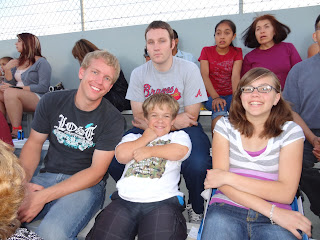 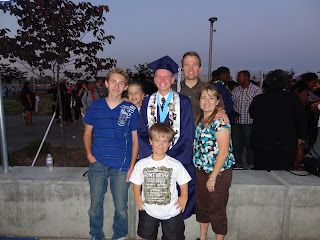 The next day was Wednesday and Ashley's play! They all did a great job!! 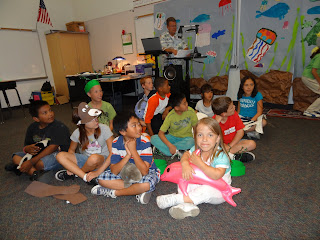 The kids remembered their lines and all sang their parts great.
One of the students even wore my clown fish hat from last year. 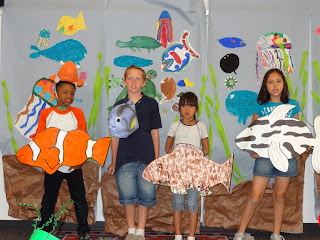 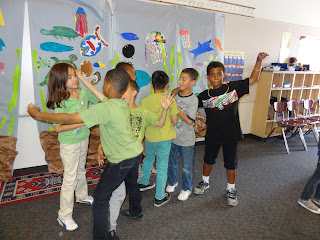 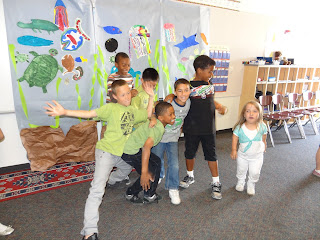 Thursday I brought in Fish cupcakes 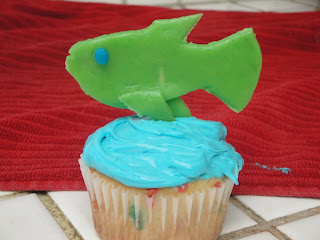 They looked cute when I first put them together but they started getting floppy in the heat as I brought them too the classroom.
Next time I'll freeze them first :0) 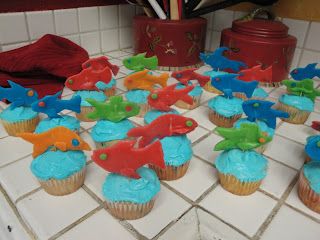 The next day was the last day of school for Taylor and Ashley and Jacob was already home for the summer. Ashley woke up sick...so it ended up being her first day of summer for her too...Taylor was done by 12:00 with his finals feeling sick too. So my last day of freedom was cut short...
but thats OK I was packing for our Utah trip. By 4:00 we were packed and the car was loaded up and we were on our way to Utah. Luckily the kids perked up and were fine on the trip.
Posted by Christine at 8:22 PM

So we can expect pictures from the Utah trip? Or did I miss them? I'll have to check. :)
I have a handful of comments:

I do not like coconut.
I would not want to take a bath with a dog either.
Two white tshirts? Yeah, time to buy his own stuff! :(
And lastly, that baby Caden is adorable! What a fun hat!
Love the update, Christine.
Happy Summer! Hope everyone feels better and happy.

I love those cupcakes! What a fun idea!!