Last week we had our Secret Sisters reveal party.
6 weeks of giving gifts and notes to a sister we picked ending with a revealing.
I accidently blew my cover on Valentine's day when I was cookie dropping. My "With Love, From Your Secret Sister" got accidently delivered to the wrong house and my secret sister got this. 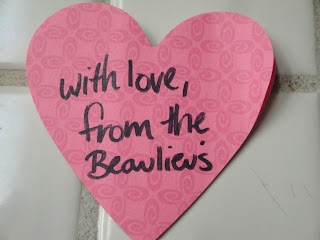 We laughed about it later.
I wasn't picked by anyone to recieve gifts so I'm sad to say I had a few pity party feelings as I heard about all the cute things that other people were getting and how FUN the whole secret sister thing was.
That was until I went to the reveal and realized how many other sisters selflessly gave and didn't recieve. In fact there were a lot of the older sisters that had picked people that hardly anybody knew, they were homebound or we never really saw them. They were the last people that were going to come to this party and so they wouldn't get any kind of recognition for their efforts. I was humbled and impressed.
My lesson on that Sunday was about the Sermon on the Mount and the part about not doing things to be seen of men but storing up treasures in heaven. We talked about the mostly one sided secret sister event and what it taught me. Perfect timing.
I thought it was funny that at the end of my lesson one of the older sisters that I was so impressed with at the party came up to me after and thanked me for my comments. She had been feeling her own pity party feelings and before the lesson had decided she didn't want to do the one-sided giving again next year. I was glad I wasn't the only one who felt that way, and even more glad that maybe we all learned to be more selfless.
I might not have gotten gifts during the six weeks but I got a better gift in a new friend. Barbara is newer in the ward and we are just getting to know them so we were happy when she invited Jeff and I out to dinner and our family over for Pumpkin, ginger pie with a marshmellow crust on Saturday. So now I have a friend and a new recipe. Yum! So we don't always have to wait until heaven for our rewards ;)
This Saturday Ashley got to go to the Stake Activity Day where they did all kinds of fun activities, including hip, hop dancing and eating lunch with lots of friends. She loved it and I was so glad for Andrea who was willing to carpool them all down there. 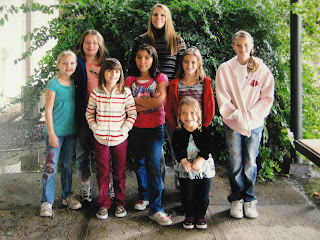 While Ashley was there Jeff took the boys to Hanger 18 for some rock climbing (since they got rained/snowed out of their campout plans)
Taylor had a track thing in the morning (the bloody track practice, followed by a dedication of their new field) but I made sure that Jeff planned it so Taylor could go with them and he had a blast. 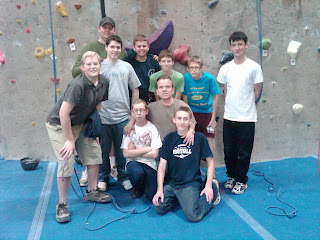 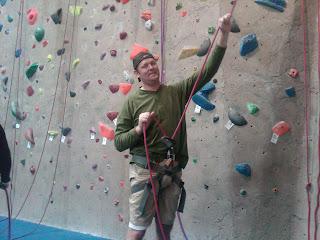 Look at those manly men ready to climb! 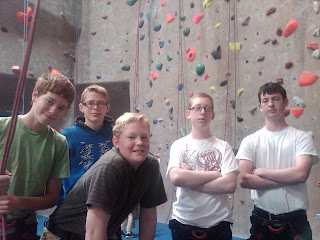 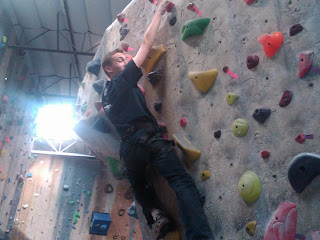 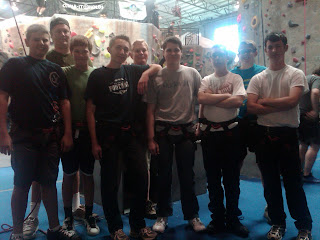 Showing off the muscles that were so weak and shaky later in the day Taylor passed up an invitation for Cosmic bowling "I don't I could hold the ball!" He said.
Taylor got the tongue action from dad...it comes out whenever anything intense is happening such as playing video games, working out hard...or showing off muscles. 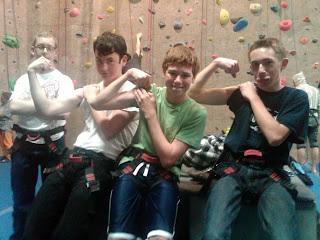 Monday for Family Night Jacob requested coconut brownies (which I usually make during Christmas). They make a big pan and I wondered what we would do with all of them.
Hmmmm ... sneaky Jacob had plans the whole time for them. He wanted to pack them up and share them with his friends at school....especially a friend thats a girl.
This isn't the first time that Jacob has brought a girl at school brownies.﻿
Honestly I'm too flattered that he would want to use my cooking to impress a girl to care to much. 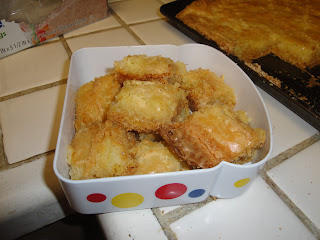 Yesterday Maddie had her first doggy play date.
She goes CRAZY when we pass by dogs and wants to be TOO friendly every time we pass by one. So it was nice to try and socialize her.
Magnus is BIG and playful too. But a little overwhelming for her so she either hid under their table or was in this position. (At least she was wagging her tail at the time) 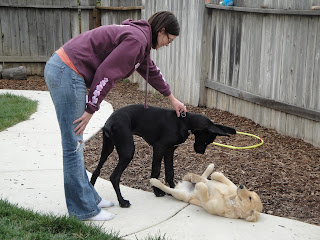 I don't think Magnus thought she was a very good playmate. Maggie was like the shy kid that doesn't want to play on the playground. We'll get her to come around eventually ;)
I'm sure all dog owners wonder how a pet that is so cute... 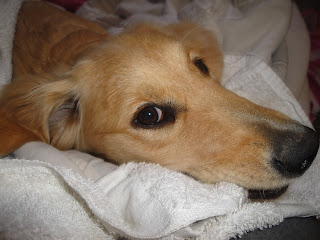 be so maddening at the same time.
(Yes that is mud...the mud we have to deal with every time it rains.) 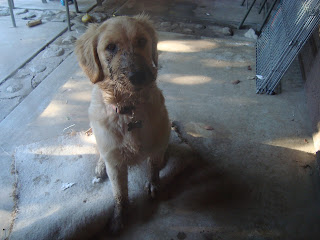 Yesterday afternoon Taylor participated in his first track meet!!
This is him in his "too cool" look to frighten all the other competitors (just kidding). 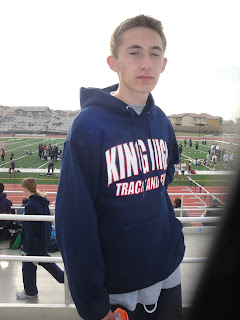 When I got there at 3 I saw him as he walked quickly by to warm up  for his first race. He wanted to run the 800 meter but the coach signed him up for the 1600 and the 3200 instead.
(1/2 mile, 1 mile, and 2 mile for you newbies like me that don't have a clue what those numbers mean)
He really wanted to try the 800 so the coach said he could run that too. His friends were impressed that he was running 3 races (especially since they were the 3 longest ones) 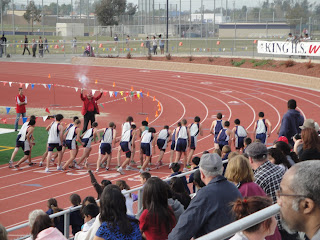 So basically the whole track meet he was either warming up, running an event, cooling down then stretching for the next event. Sometimes he said the cool down was the warm up for the next event. I saw him in person only a couple of times in passing.
I sat by myself in the stands (Ashley was at the Stubbs and Jacob was chillin at home) waching the 3 1/2 hour track meet. Luckily I found some other moms to talk to. I was very glad to meet a more experienced track mom who actually had a schedule (the only way I found out which events he was in) and could tell us what to expect this season. 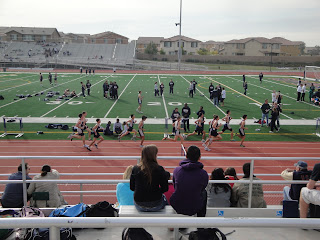 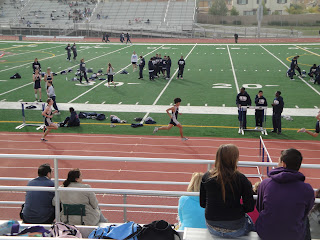 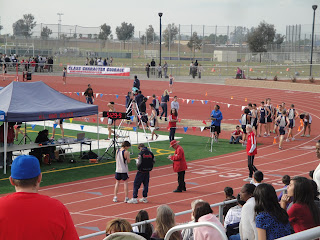 Taylor's running style is to start out a little slower and then pass people one at a time. At a couple of the races he would get to a person who matched his speed and stay with him. There was a boy who was keeping pace with Taylor while they were running the mile and they both did better than they had ever done before.
At the end he thanked Taylor for helping him to push himself to be better.
Thats what I love about my friends, family and people around me. They each have something about them that helps me to push myself to be better.  I might not be able to keep up with all of them but I can do a little better than I would have if they weren't in my life :)
Posted by Christine at 10:09 AM

I love it when your life prepares you to receive the lessons more open-heartedly.:) I really am impressed at how well you journal your life...unbelievably busy but a true family! I know my business is coming as they get older!!! I just hope I'm not too old to enjoy it:)