Creativity, motivation and Christmas in August...

CREATIVITY
So necessity is the mother of invention or so I've heard.
One of the school supplies that the boys needed was a white board eraser. The teacher suggested and old sock, I didn't want my kids having to pull out dirty old socks to use at school so I was trying to think of a better solution.
As I was putting stuff away Jacob saw this... 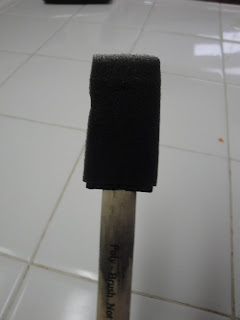 and said "Is that my white board eraser?"
Ooooohh what a good idea! "Why yes Jacob!" (It fits in his pen holders, it's cheap and it's not a dirty sock.)
I pulled out another one for Taylor :)  Sweet!
I was making dinner the other night and Jacob said "I want stuffed crust pizza!" Well we were having home-made pizza...so I got to thinking what if I rolled up sections of string cheese in the crust????
So I did and it wasn't half bad....and more importantly the kids LOVED the fact that it was stuffed crust. 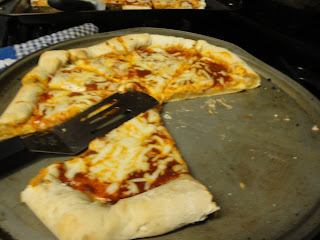 Jacob told me today at school that a kid traded him just the stuffed crust portion of his pizza for the rest of his barbeque beef sandwich (Jacob loves them). He thought he got a pretty sweet deal out of it :)
This week Lori and I were good girls and went out to do our visiting teaching...the question is always what to bring them...luckily I had dipping chocolate in the freezer from Christmas (that I never used at Christmas) and some pretzels... 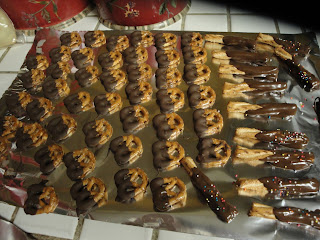 ...a fast easy visiting teaching treat that didn't require an oven! (Who wants to turn on their oven when it's 108 anyway!)
MOTIVATION
So this week Jeff was invited to my alma mater to be a guest motivational speaker for the BYU faculty.

Jeff has clients that moved up there and work for the school. They thought Jeff would be great as the motivational speaker and they knew if the school flew him up to speak they could meet with him for business too ;)
Jeff joked that he would say that he was a BYU alumni by marriage. He didn't go to college but he paid for it. Fun to joke about until he's ready to get up in front of all these highly educated people and he starts to get a little nervous about what he can teach them.
The dean let him know that they've been having problems with cuts and being understaffed and overworked and being discouraged.

Well Jeff did what he does best and shared a healthy dose of perspective. He shared stories, motivation and encouragement. He also tried to be real. He's learned as much as anyone that life isn't meant to be easy and having challenges is NOT a reflection of how good of a person you are or how blessed you are. Look at the prophets in the scriptures, look at the life of Christ himself. They weren't above the worst kind of challenges and yet they were highly favored of the Lord. Hard things are part of life and is what helps us grow. The key is to strive for a positive attitude. Often we can't change certain things about our circumstances but we can change our attitude.
After he was done speaking he got lots of feedback from grateful listeners who appreciated his words and his positive attitude.
He said one person stood out from the rest. He told me he didn't know who he was but he seemed a little pompous as he was talking to him. The guy mentioned his name was Brad Wilcox.
Jeff thought for a minute...."Brad Wilcox,  Brad Wilcox...that sounds familiar...are you famous or something??"

The people around Jeff almost gasped "Oh yes he's an author and a speaker.."
Jeff said "Oh yeah, I think my wife has seen you at women's conference. I think she might have some books from you around the house. She would probably know who you are."
I had to laugh because Jeff was in his stomping grounds (It seems like he is at every BYU thing) and he had no clue who he was! Probably took him down a notch.
While Jeff was out motivating them I was motivating our children...
Ashley came home sick today (couldn't even make it through one week of school) She has a miserable cold and is dripping all over the house.
So I had to motivate her to stop crying throughout the day even though she's miserable. I had to also keep telling her she doesn't have pink eye either, her eyes are just watery from her cold.
Every bathroom is out of toilet paper because she unrolls a wad of it every time she needs to blow her nose. I even gave her her very own roll of toilet paper...it didn't help.
I left all the rolls empty until she went to bed tonight :)
Over the last 2 days I had to work with and motivate Taylor to stick with his engineering class... 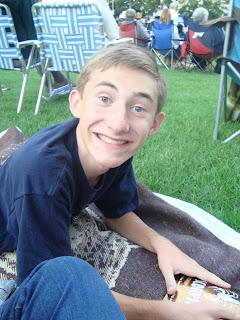 I think his new schedule...or at least worrying about his new schedule has got him very worried about his engineering class. He feels like he's in over his head and is already ready to transfer out (He's worried about his grade after 3 days!). I told him he could transfer out if his counselor could get him into something else.
She couldn't because every elective was full so he came home saying she would just rearrange his schedule and he won't have a 1st period class. What??!!
Not an option!
So I went in there today and met with the counselor and came up with a compromise that involves him putting his best effort until progress reports come out and we'd go from there. So he's agreed to try his best and see what he can learn. I told him it's a good thing hes out of his comfort zone...thats the times I'm learning the most...even if it's uncomfortable.
Jacob was trying to be motivated by an 8th grade friend to hold a girl's hand today....WHAT??!! 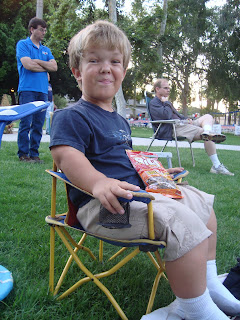 While Jacob was walking to class today an 8th grade girl came up to him and asked to hold his hand on the way to class....."UUUUMM I don't think so" he said.
His friend said "Dude, you should've done it!"
Then her friend came up to him and asked the same thing!
Again he refused and again his friend said "DUDE, you should've done it!"
I asked him if he knew who the girls were. He had no clue!
Ha ha ha...are you ready for this new kind of attention Jacob???
CHRISTMAS IN AUGUST
So we're planning projects for our super Saturday in October and they want samples by...Sunday. So I've spent the last couple of days coming up with inexpensive...not too hard to make Christmas projects
We have to decide which one's we're going with so we have an ornament that can be made in about 5 minutes that will sell for $2.00... 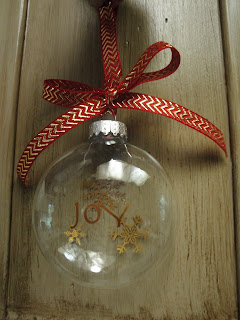 An snowman ornament that can be made in about 1/2 hour that can sell for $1.00 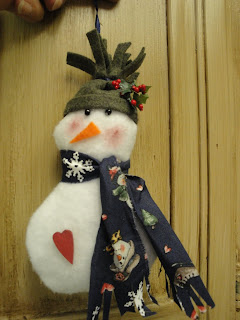 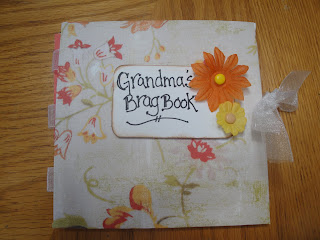 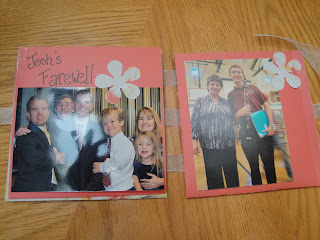 when you first open it 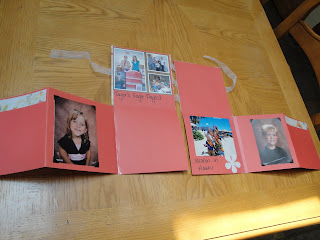 opened all the way (there end up being 14 panels front and back)
So opinions on these items and wether or not the prices are reasonable would be welcome...
All this Christmas planning has got me thinking of the season and the joy and peace it brings. I think other members of my family need to reflect on the true meaning of peace...
Ashley walked into my room yesterday while Jacob was playing video games. "Ashley just go out and close the door! I want to play my video game in PEACE!" He was playing Modern Warfare II.
Posted by Christine at 10:56 PM

I love the Joy ornament!! Am I supposed to continue helping with the enrichment stuff? After I got the music calling and Megan was released I haven't been contacted about enrichment since so I was just wondering??

I think they are all nifty, but I like that snowman the best.

It is fun to be out in the open and not a stalker anymore...I'm glad I saw you last night :)