A Hike,a wedding and ordination

This month we have had big things going on every weekend. This weekend Jeff and Taylor were supposed to go to the Mountain Man campout on Friday race back in time for a wedding on Saturday that they both were part of and then get ready for family to come over for Taylor Priesthood ordination the next day.

I was at the store buying the food for the campout when we got the call that it was cancelled due to snow. It was a welcome relief for Taylor and the rest of us. So we spent the weekend enjoying our unexpected time. Taylor hung out on Friday with friends playing games, and Jeff and I did a quick date night before most of a week apart.

Saturday I went to an early morning hair appointment and when I got home I was thinking it would be nice to use this time to spend together as a family. I wasn't feeling in the mood to stay cooped up in the house or run around doing more errands so we talked about doing something outside and getting exercise at the same time. 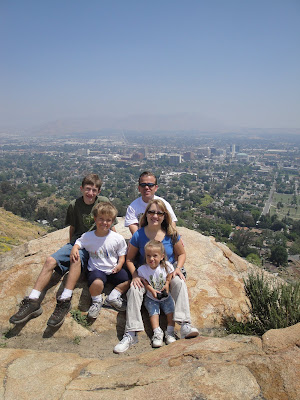 Before we got started we had to make sure to set the ground rules...including none of us having a "Dog of leash".

We saw a few "dog of leashes" while we were there as well as "dog nuisances" that were not properly disposed of with the city provided "dog nuisance" baggies. 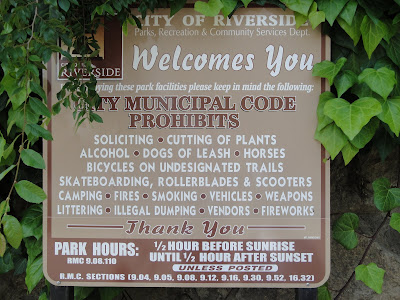 "Watch out dog nuisance on the right!" 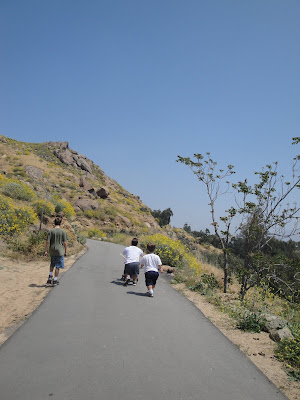 The weather was perfect. Warm with a bit of a breeze. The flowers were in bloom. We saw a ton of lizards sunning themselves but our favorite was the view. 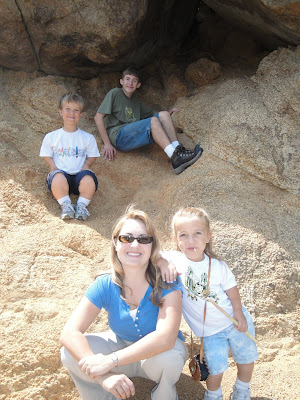 If it wasn't so smoggy it would've been perfect :) 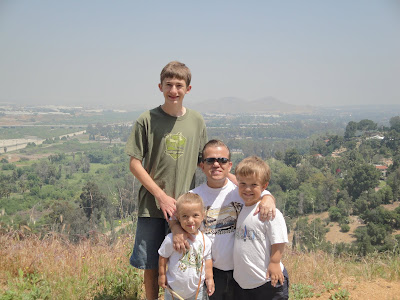 We even met a few friends along the way. 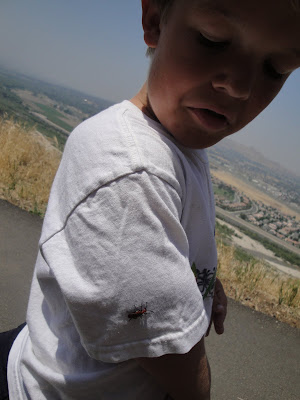 We got to the top without anyone complaining that their feet hurt, or they were too tired or "are we done yet" (It helped that Ashley was in a stroller most of the time) 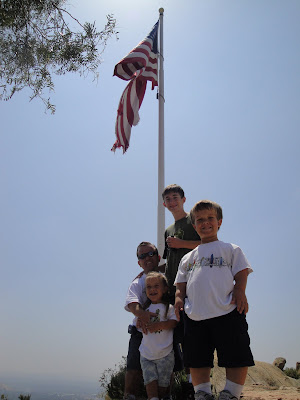 I learned that this was the first place in the nation that started and annual easter sunrise service and once they started it other states started following our example.

Jeff said he remembered coming as a scout when he was younger to help with lighting for the Easter Sunrise services. He said the one thing he remembered the most was the killer stairs. 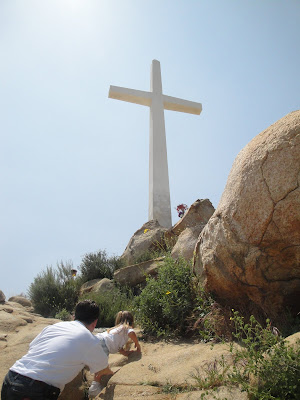 They were just the same as he remembered them! I had to lift Ashley up each step since they were each about chest high to her. 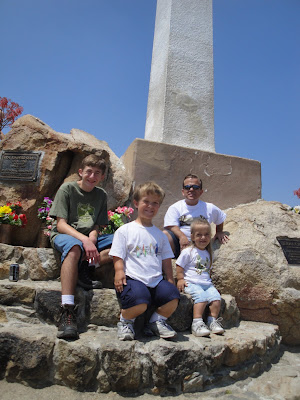 I'm so glad we did the hike. By the time we were coming down we were laughing and enjoying our time together and best of all it was free. We came home a little tired but in a good mood. 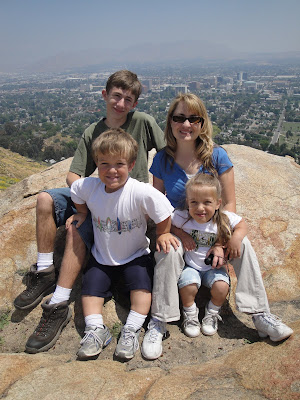 After a couple hours of resting it was time to get Jeff and Taylor over to the Nelson's backyard wedding reception. Jeff was asked to MC and Taylor was asked to play the piano for about 1/2 hour as they held the wedding line. 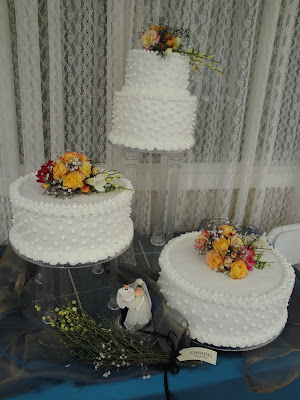 The Nelsons pulled out the piano and Taylor was asked to play ragtime for about a half hour. I think that he was nervous about it all week. He practiced his ragtimes over and over but I think the thought of being the main music entertainment was stressing him out. After it was all said and done he said it wasn't as bad as he thought it was going to be and he got a lot of compliments but he was definately relieved when it was over.

As I was taking this picture of him he said "Mom...Jacob...I can't play when you're distracting me!" 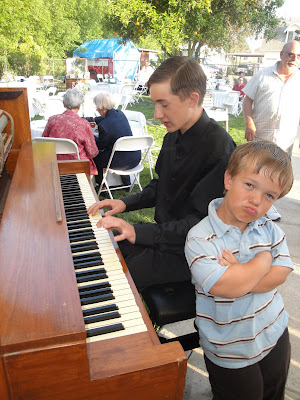 So we left him alone. He ended up having to play for about an hour and a half because people kept trickling through the line. Jeff kept asking if they were ready to start introducing the wedding party. They weren't ready so they kept saying "Just have Taylor keep playing." So he played. His fingers must have been numb by the time he was done!

After he was done playing he got to hang out with the rest of his friends at the Soda bar. I wasn't sure what to think when I saw the teens running the bar pouring 1/2 and 1/2 into a cup along with ice and sprite and flavoring but I guess it's considered an Italian soda and once I tasted Ashley's vanilla I thought it was pretty good. We then had to try mango and peppermint chocolate. It was Ashley's favorite part of the wedding :) 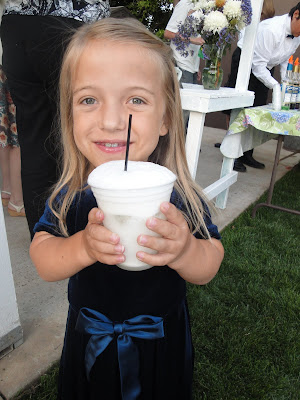 The next day was Taylor's ordination. He turned 14 last Tuesday and we're still trying to schedule a time to celebrate it properly. It's frustrating when you have a son that doesn't want anything for a present and doesn't want a party or anything. We were going to take him to Knotts but he'd rather go to the dance that night. We'll have to think of something.

Anyway we had family come down after our church meetings for Taylor's ordination to become a teacher. It was touching to have a full circle of men who love Taylor and are wanting good things in his life.

Afterwards we all came over to our house to eat and hang out with cousins. 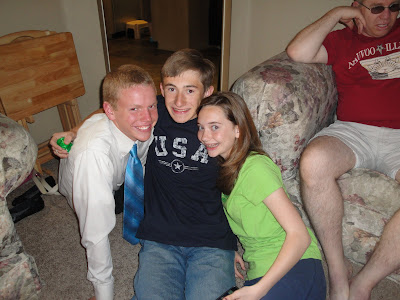 It worked out perfect for Connie and Mike who just finished chior practice :) 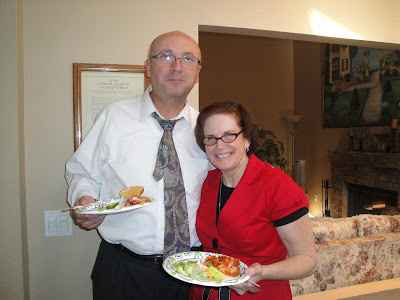 Angela and Robert were willing to make the 2 hour drive to come and Joel took the cake when he came all the way from Seattle (he actually was in LA for a convention and the timing was good). We were so happy that they would be willing to come from so far to hang out with us. 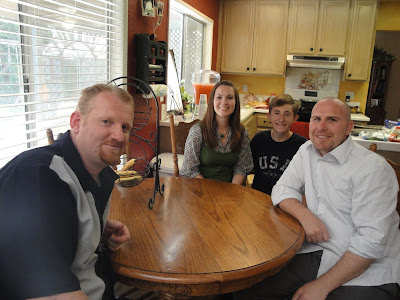 We all really enjoyed our time with the family. We've had more opportunities lately to get together and it's been a lot of fun to reconnect and enjoy each other. 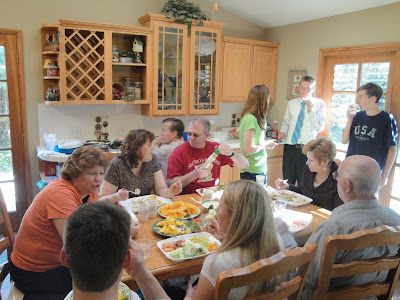 Our next event is Cheri's baby shower and then Jareks homecoming. Can't wait. (Ashley just asked me 10 minutes ago when the baby shower is :)
Posted by Christine at 12:05 PM

Wow, so much family fun! The hike looked like a blast. I am so glad I found your blog Beaulieus! Your family is beautiful :) Our blog is kandsosborne.blogspot.com

(This is Sarah Taylor)