Service, Celebrations and the Cellar

I have a little catching up to do. Last I posted I was enduring single parenthood. We were very glad to have Jeff come back late, late on Friday night. He got home in time for us to complete our family service project for the Disney give a day, get a day program.

We collected baby items for the Riverside life services for our service project, now we'll get a trip to Disneyland as a family. Definitely worth the price of admission! 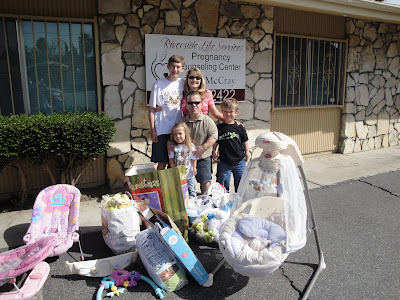 After that we went to Ramona High School for their first annual Piano Festival. You could sign up and play for 3 judges who would rate your ability and give constructive criticism.

That's OK it was a good experience overall and it'll give him something to work for next time.

After his performance we cashed in our Christmas gift certificate for P.F. Changs to celebrate Taylor's performance and spend some time as a family before another busy week. 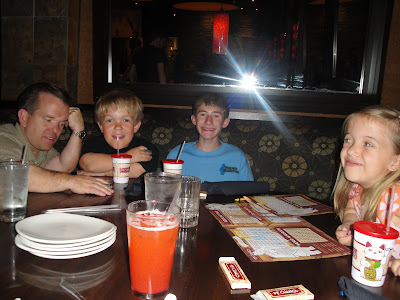 Fast forward to this last weekend and we brought the kids to see Diary of a Wimpy Kid. Jeff didn't know too much about it but the kids were very excited (especially the boys who read all the books). 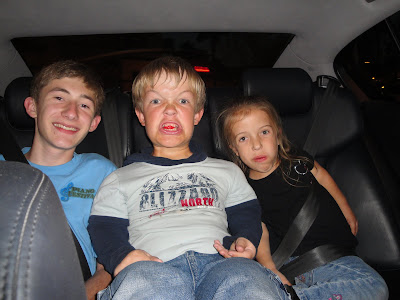 How did the family rate it...

and Jeff..."that was the stupidest movie I've spent money on in a long time....mumble mumble...waste of time..."


This Saturday we were in charge of helping with the Little People of America Easter Party. 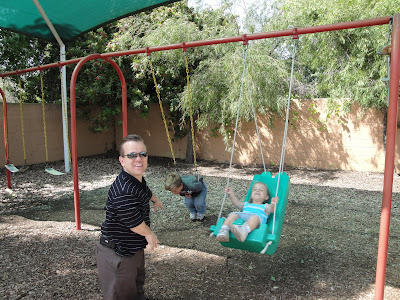 Taylor was invited on a hike with friends so for the first time he decided to skip the LPA party and go on the hike instead. I guess he's getting too old for egg hunts
(of course he wasn't past trying to snake candy from the younger two later).

People were having fun hanging out on the playground of the school we rent. (The equipment is pre-school size which is perfect for us!)

Planning these events has been interesting. I've served as Vice President and Co-president for the last 4 years and this event was an election year. I was planning to take a break.

We discussed different names to have on the committee, nobody would step up...it looked like I would be on the "ballot" for Vice President again.

I cringed as I thought how over these last 4 years it's been a struggle but I guess we'll grin and bear it for 2 more. 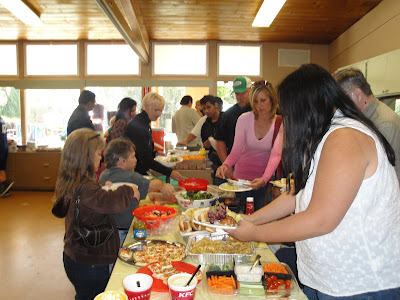 So on to the party. There is usually plenty of food brought but with dividing food assignments up by last name you always wonder what your going to get. Usually it works out pretty good but this time we had a lot of salad and desserts so I'm glad I bought hot dogs as a supplement ... all 80 of them were gone by the end...

Once the other committee members got there we started playing some games. Since we were planning this event during the Olympics we decided to have some "Olympic games" complete with medals to award the participants.

This first game was the "shoes relay" we stood in a line and had to run and drop our shoes at the end of the line. Once the line had all dropped their shoes we ran back to collect our shoes and put them back on. Ashley wasn't sure about it at first but she did fine ;) 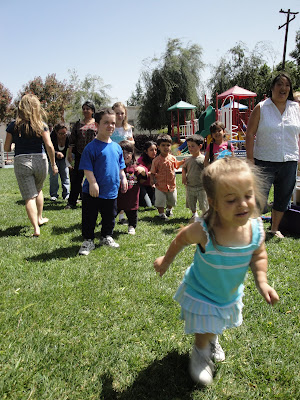 Once Jacob heard the rules he was out of there. He didn't want to participate. 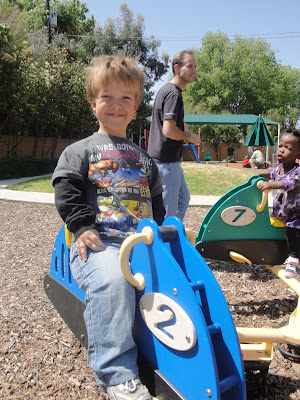 Next was the sack races. After the kids participated it was the adults turn...:) 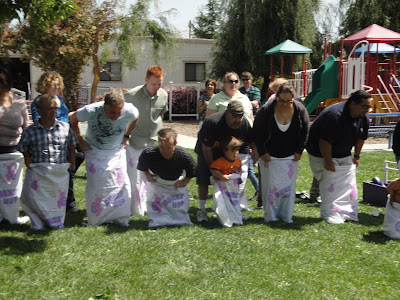 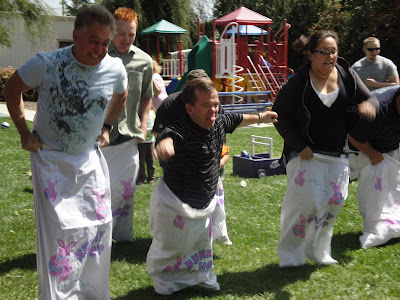 Next was the egg on the spoon relay. 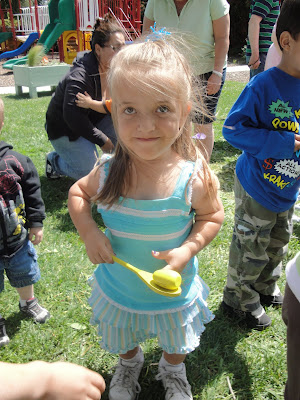 Jacob do you want to participate???? "No" 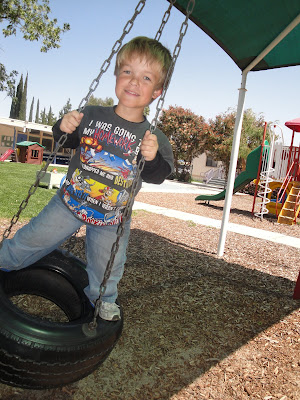 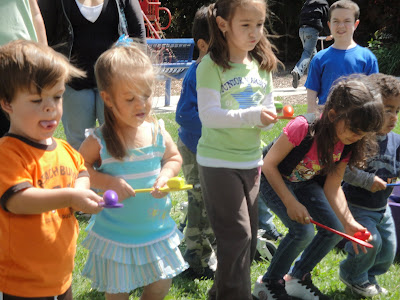 Whoever thought to use wooden eggs was smart. 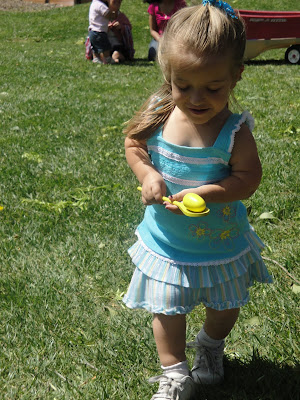 After the races it was time for the egg hunt. There was supposed to be a limit of 12 eggs per child. Those who couldn't count yet exempted themselves from this rule and came back with an overflowing bucket of eggs.

Ashley took exactly twelve, Jacob took 25. (When they were fighting over one empty egg the next day I warned him that if he complained I'd split his eggs up evenly with her :) 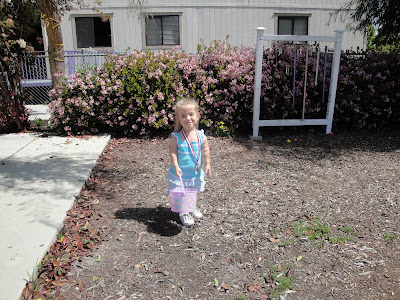 After the Easter Party we raced home to get ready to go to dinner with the Vincent's.

By some miracle we weren't even late despite the fact that we ran out of gas on the way home from the party.

I knew my gas was low and I kept asking Jeff how we were doing on gas. I've run out once before and I know that you can't let it get too low below empty. He promised he would get it in Corona since he was in the toll lane at the time. In Corona he wanted to keep going and thought "we would just make it, but it would be close". He was driving to Central where we were picking up his car from the tire place.

As we are driving I'm thinking in my mind "What if we run out of gas in the fast lane and we get stuck on the freeway".

Well sure enough at Arlington (one exit away) Jeff is on the phone and he pulls across all lanes of traffic as he is losing the power steering and the power brakes. We're out of gas. He is lucky enough that the light was green getting off the freeway and the offramp was downhill. He pulled into a drive way to a business and there we sat. He was still on the phone acting like nothing was going on to the client he was talking to.

I refrained from saying "I told you so" too much and let him figure it out. He jogged over to the oil change place nearby as he found a guy with a gas can who was willing to drive him over to get some gas. He was very lucky. The kids just sat in the car and continued to watch their movie.

We got home with a few minutes to spare before the Vincents came to get us.

They took us to a nice restaurant out in Fullerton called the Cellar. 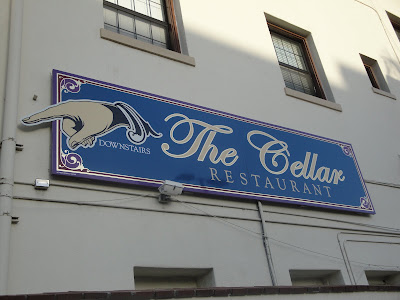 It was a French restaurant that you walked down inside of. You felt like you were in a wine cellar/cave. It was cozy and interesting. 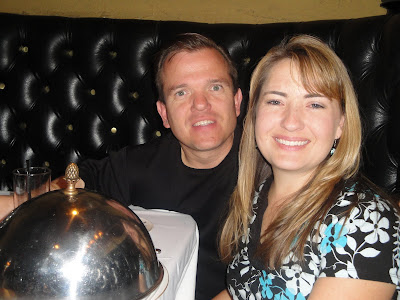 Scott and Penney talked about the escargot that they had eaten last time they were there and when Jeff and I cringed they got them so we could try them. Sooo...we have both tried snails now. I have to say they weren't bad at all. I was so expecting to hate them, I actually liked them. (the garlic sauce they were in helped too). 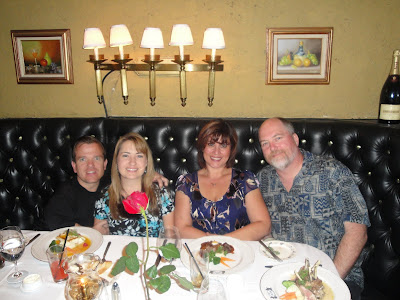 I got the halibut... 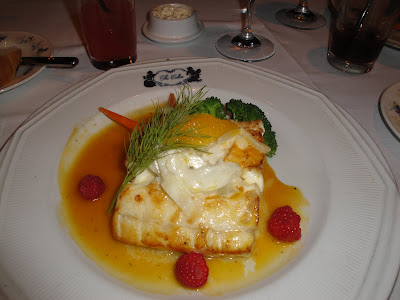 and Jeff got the steak... 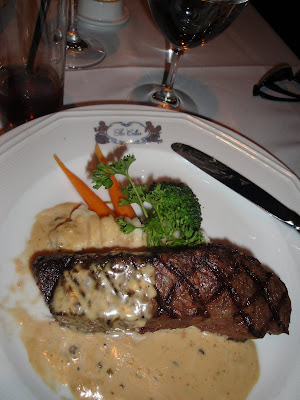 It was a very nice evening and we were very grateful for nice friends who invited us out especially after such a crazy day!
Posted by Christine at 8:52 AM

I am also really amazed when I read your blog... just reading it makes me tired... I really don't know how you do it all and do it so well. You ROCK!!! And your kids are pretty amazing too... tell Taylor good job for us:) Jeremiah read all those books too and really wants to see the movie, I think I am with Jeff on this one. I told Jeremiah he and Dad could go out for a guys night and go see it without me ;)