Where does the day go?

OK for the past little while I've spent the majority of my time preparing for, attending or cleaning up after various school events, parties, market days, plays and so on.

I won't bore you with all the details but here's some highlights... 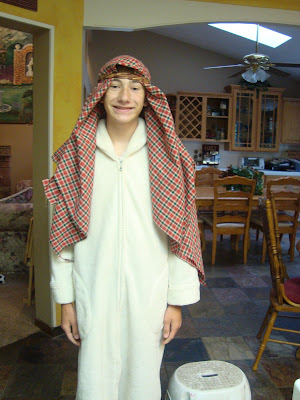 Taylor in his "middle eastern" costume for History Day event. There wasn't too many options for boys. The only suggestions were long, white shirts with pants underneath and a head dress. "Wear your Dad's dress shirt" they said. What do you do when your bigger than your dad?

Wear your mom's fuzzy, furry robe until your too sweaty to handle it any more. 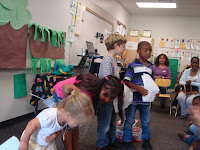 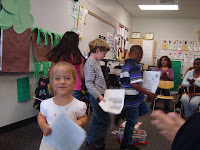 Ashley taking a bow at her "play". It was more like a readers theater but very cute. I actually didn't find out about it until the night before and I had a hair appointment at the same time.

I was a good mom and rearranged it. Good thing because one of her classmates was watching for her mom to come the whole time and when she didn't come she started crying. So sad. 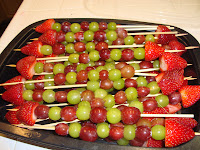 Here are the fruit-ka-bobs that I promised to bring to Jacob's classroom for his party. Being room mom I also agreed to pick up the pizzas for the party. So there was one trip to the school to pick up money for the pizzas. Then there was a trip to the store to pick up the stuff for fruit-ka-bobs along with all the things that parents signed up for and then "forgot". Then it was back to the school to help with the party. 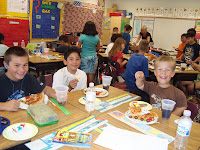 I almost thought I'd lose my "room mom" title when I showed up almost 1/2 hour late for the party.

I walked into Little Caesars to pick up the pizzas for the class party. (The teacher called it in multiple times to make sure that they would be there on time). There were two moms ahead of me picking up 8 pizzas. I counted the stack because that's how many I was picking up and I was judging how hard it would be to carry all of them. When it was my turn and I asked for my order my heart sank when I noticed the completely empty shelves all around me.

The counter girl slowly went back to get my ticket showing my order. "Uh, your pizzas are in the oven, you'll have to wait." she told me as she squirmed.

"What?" I said. "They were supposed to be ready to pick up."

She looked at the ticket and said "They were supposed to be picked up at 2:10."

Then she finally fessed up. "Well someone else came in and ordered 8 pizzas so I put more in the oven." She said defensively.

So basically she had given away my pizzas as I was standing in line waiting to pay for them. "It will only take five minutes." She said.

Not wanting to make a scene there was nothing to do but sit on the plastic chair and wait.

Within 5 minutes someone came in for a "hot and ready" pizza and she passed one off immediately.

Where did that pizza come from? And why wasn't it not put in my stack?

Luckily counter girl was within my sights the whole time so the next time she tried to give up two more of "my" pizzas to the next customer I gave her a pointed glare until she said "Uh never mind" and stacked them on to the rest of my pile.

Is this girl for real???

I ran out of there once the pizzas were done but it wasn't until later that I realized I should've complained more so it doesn't happen to someone else. Just a word of warning to all those room moms out there. 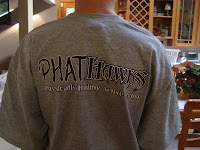 Taylor doesn't get plays and parties but he did come home with his own trophies. The first one is the coveted Phat Hawk PE T-shirt that allows him bragging rights and ability to get in the front of the line for the locker room next year. Phat stands for Physically Healthy Active Teen. Only 3 boys and 3 girls in each class received these.

His other trophy was a paper that he had to write for Mrs. Stearns class (you might remember his laments about her earlier this year). One of his last papers of the year and she gave him an A+, glowing comments and praise in front of the whole class (which embarrassed and pleased him at the same time). He's finally getting an A in her class. He did it by ditching the laptop. He never has to worry about forgetting to print out notes or assignments any more.

I'm so glad we bought him a laptop that was only used for 6 months or so... 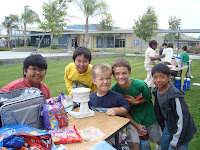 Here is Jacob at Market Day. I helped him and his group sell snow cones and hand made kazoos out of Popsicle sticks and rubber bands. We worked on these booth items all last night in between orthodontist appointments, complaints about our trees from the neighbors and a nice lady from 3 blocks away who found Jacob's clarinet sitting outside her house last week.

He is a lucky boy, since he didn't even realize that his clarinet was missing yet. I guess we should put his name in it huh.

Tommorow should be a little more relaxing with a presidency meeting, followed by a birthday lunch, followed by Ashley's class party followed by one of Ashley's final dance classes. Hooray for summer.
Posted by Christine at 3:15 PM

I love that parents get bragging rights when children do so well. A glimpse of the eternal perspective.
Having worked in food service for seven years, your pizza story drives me crazy!!

Like the new look to your blog! WOW! I don't know how you do it ALL you are amazing!!! I an right there with you an the cheer for SUMMER!