I'm thinking my blogging is becoming a once a week thing. I thought after I finished the Twilight series I'd get a hold back on my life and have more free time. (Those books sure were addicting, and more than one household chore got put off by me reading them!)

On Tuesday we were able to witness Jeff getting his beads at the beading ceremony for completing his Woodbadge training. Way to go Jeff! 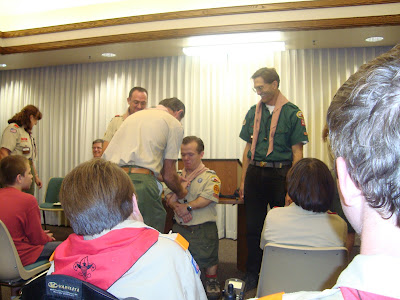 Unfortunately Jeff went out in the hall with all the people that visited for the beading ceremony and he missed Taylor's pinning ceremony to recieve his Star. Jeff had the camera so we didn't get any pictures of Taylor. (I sent Jacob out to get him and he went around the building the opposite way of where Jeff was so they all missed it.) Way to go Taylor! 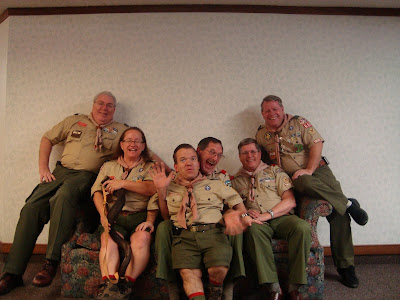 Wendesday was Ashley's birthday. She was very specific about what she wanted to do this year to celebrate her birthday. We didn't get to do everything on her list but in the end I think she still was happy. I brought in cupcakes but instead of the party bags she wanted I brought in valentines fun dips and bubbles. I didn't realize that the kids would eat the fun dips in the class (I thought they would bring them home). There was lot's of sugar on the desks and green fingers but I'm sure mom's were happier not to have them brought home. One of the kids said "I love these. My mom won't let me eat them anymore. She says I have to be outside." I saw why:)

That night we took her to McDonalds and met Jeff to open a couple of presents and eat dinner together. 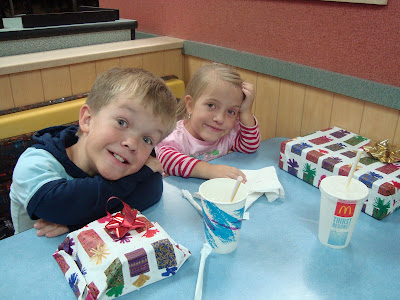 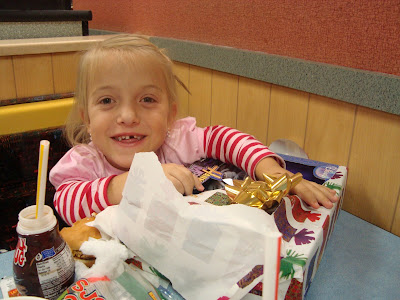 On Thursday I went over to Heather's to paint her fireplace. She tried to describe what we were planning to do to Matt but without seeing it I'm sure he was a little worried. Luckily he like it :). I didn't get a picture but she says she posted it on her blog.

Friday I helped at the school in Ashley's class at the end of the day and then we came home to clean and get ready for her birthday party the next morning. Again she was very specific on what she wanted done at her birthday.

We convienently nixed the....
Karate fighting,
wearing pajamas,
and wearing costumes,
pillow fighting,
and the magic show along with a lot of other things that would've made the party 6 hours long.

We did get a pinata in there, the marshmellow game, dancing, playing eye-toy, face painting and make up (that was interesting), nail polish painting, and of course cake, ice-cream and lunch. 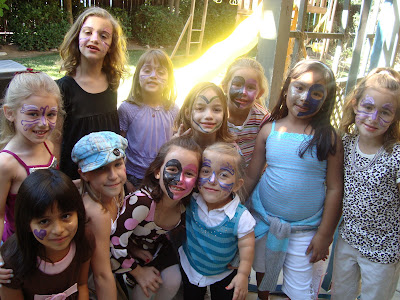 I was very grateful for Angie (Taylor's mom) who was able to stay and help since Taylor and Jeff were at the temple during the party. I would've been on my own with 11 girls! Thanks Angie! The girls were all great anyways it just would've taken another hour to get everything in. I'm sure Mom's were wondering what I had done to their faces. I did let them pick what they wanted painted on their face and some of the girls wanted hearts that covered their whole face. I'm sure that was fun to clean off.

That night Jeff and I had the opportunity to go to the Opera (my first). Someone gave us tickets the day before for free, because they couldn't go. It was a showing of The Magic Flute down in LA. Jeff was willing but a little unsure of how much he would enjoy it since it was all in German and from what he remembered of his opera experience in Italy it is very hard to understand what is going on. Well it was a lot of fun. Subtitles helped us know what was going on the our seats were in the 3rd row back so it was very easy to see. Definately a fun experience that we weren't expecting. He enjoyed it much more than he thought he would. I'm going to try and show the kids the DVD of the Magic Flute to give them some culture. Jeff's is thinking I'm crazy but I'll still try. He commented "You might as well put on conference for them." I'm curious what they will think.
Posted by Christine at 2:25 PM

Wow! You are super mom--what a fun party you hosted!! I am so glad you found our blog and it is fun to see yours...it makes me so happy to know Taylor had Ms. Stalder. That means that Carter is off to a good start, right? Happy Birthday to Ashley too...sad that she won't let you put her hair up anymore...I hope Claire lets me for a while, at least!

Great blog! We're going to add you to our "blog roll!"

Happy Birthday Ashley! I looks like all your work to make her party a success worked. I love the face painting idea. Plus, I saw what you did for Heather and it was incredible! You have an amazing talent!