Are We There Yet?

I just got back from Spain last night and had intentions of updating my blog as our trip progressed... Well that didn't happen. It was going to be about $25.00 a night for internet so I thought I'd do it when we got home. So I'll share my story here and there...

Jeff and I have been anticipating this trip to Spain for weeks! We got the kids all set up with babysitters, food and arrangements for the week and we were finally ready to be off. We were looking forward to this trip to spend time together and to enjoy a little bit of Spain. We planned to only come in one day early so we could see a little on our own before the conference started. The plan was to leave on Saturday morning and we’d be in Spain on Sunday morning. We were prepared for a long trip but we had no idea that we were in for our own version of The Amazing Race…

So Saturday morning and we’re up at 4:30 to be out the door for Lax by 5:30am. The drive was great because nobody in their right mind wants to be on the road that early on a Saturday. We found out at the airport that the 2 flights after ours going into New York had been cancelled for the day because of the approaching hurricane so we thought that we were pretty lucky.

The plane offered us a total chick flick movie and a bunch of sitcoms to help us keep our minds off the turbulence. The video machine was right above my head so the stewardesses had to open my overhead bin about 50 times (no joke) to re-set up the shows and take the VCR tapes in and out. Food on the plane was not free. Jeff bought one 6 dollar sandwich and one 3 dollar cookie, such a deal after spending over a thousand dollars for the ticket! I ended up being quite grateful later because it was all the food we had for the next 12 hours. When we got to JFK we were put into a holding pattern waiting for our turn to fly into the airport. Luckily the pilot was pretty straight forward the whole time telling us what was up. After over an hour of sitting in a holding pattern the airport closed. So we had to fly to Syracuse because we were running out of gas. (Scary) At Syracuse we waited about an hour or so on the runway as they refueled and waited for the airport to open up. Our 5 hour flight turned to 8 hours making us miss our connecting flight to Madrid. We were hoping our Iberia flight would be delayed because of the weather but no such luck. Of course nobody at customer service could tell us anything and nobody at the airport knew anything until we took a train and ran forever to the gate to find out they had already left. 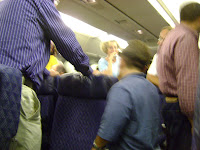 (Everyone waiting on the tarmac for the the plane to refuel)

Nobody was at the Iberia counter and customer service on the phone said to fly out tomorrow at 9:00 pm. “So what are we supposed to do in New York for 24 hours?” Jeff asked. They didn’t know, they were India and could care less. Luckily a nice airport worker (not Iberia) told us to go to American Airlines (way back where we started from) and go to their “first class” line and get help. Good tip. We were both irritated and tired but Jeff did an awesome job shmoozing the ticket agent and she got us on American Airline’s last flight out for the night going to London. From London we could get to Madrid. By the time the next guy in line was next to us the plane was full. Now I understand the relief of those Amazing Race contestants whose boarding passes are being printed out while the team next to them is out of luck. Whew!

We got on to our 7 hour flight to London and snuggled up between people on all sides to try and get some sleep sitting straight up which is quite a feat, especially since my neighbor decided to keep his light on the whole time and watch TV. We were fed dinner (for free) and then I put my blanket over my face, put the headphones in my ears to try and block out the conversations around me and tried to sleep. There was a monitor showing where we were flying and as I went to sleep I saw us moving over the Atlantic Ocean. After dozing for a few hours they came around with breakfast and I saw that we were just coming over Scotland. I was glad not to have to ponder too much on all that water that we were crossing while replaying the directions for the life jackets over and over in my head.

It was cool to be in London unexpectedly; even if it was brief it was long enough to make me want to come back for a visit. The airport was unique because we had to get ourselves to the terminal in which our flight was leaving but we didn’t know which gate to go to until the plane was actually boarding. All of us stood in front of a sign waiting for the sign to change and tell us where our gate was. I guess you’de better pay good attention or you could miss your flight. We were happy to find outlet adapters here for about 5 euros where the states wanted $20 in LAX and $40 in JFK! (Good thing we didn’t buy them earlier) 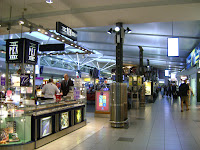 From London it was about a 2 hour flight to Madrid. We were very happy to be there but unfortunately now all our bags were lost. We waited an hour or so for the baggage to come out at the baggage claim just in case they came through but alas they didn’t. So we had to make a claim with Iberia. We actually met up with a couple of other New York life agents at baggage claim but now I wish we hadn’t. Jeff had called New York Life a couple weeks before to arrange a car to pick us up but once we were in Madrid our cell phones didn’t work so he borrowed the other agent’s cell to let New York Life know that we were there. The other agent said that he hadn’t arranged a ride for himself so Jeff said he could ride with us. While we were waiting for our bags to possibly come through they left to wait for us outside. 10 minutes later we followed them and there was nobody in sight. There was supposed to be someone in a red shirt from New York Life meeting us but after asking about 10 people in red shirts if they were with New York life we realized we were on our own.

Desperate we went to the information booth to ask the lady about making a phone call. We realized quickly that not many people speak English here. I know how Shawna feels now! Jeff does much better than me because though I had Spanish in high school I freeze every time I try and have a conversation with someone. Anyways the non-English speaking information lady could give us no information. She could point us to the phones but they were baffling to use and she couldn’t help us. Every coin would drop straight through and it wouldn’t take our credit card. So we went back to her. How do you use the phone? “I don’t know.” Can you show us? “No.”, How much does a call cost? “I don’t know”, have you ever used a pay phone? “No”. Jeff tried one last time. “Is there an information lady to give the information lady information?” She wasn’t too happy. We gave up on the no information lady and ended up asking a nice man to borrow his cell phone. He was the nicest person we had met so far and he wasn’t being paid to help us. We have found the people here are very nice but customer service is not so good. At this point we were beyond exhausted and more than a little frustrated.

After Jeff called New York life we saw a lady with a clipboard in a red shirt that we hadn’t seen before. We were very relieved to find that she was our contact person. We were very irritated to learn that not only had the other New York Life agent not waited for us, he had snaked the car sent for us, didn’t say that we were with him and didn’t let anyone one we were still there so nobody had a clue anyone was still waiting. (Nice thanks after Jeff had done all the arranging in the first place.) We ended up having to wait for another car and finally got to our hotel at 8:00pm, 3 hours after our flight landed and a day and ½ after we left from California. So much for coming in a day early but we were happy to finally be at our hotel! 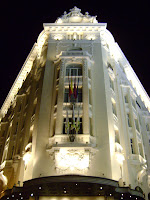 The Palace Hotel in Madrid
Posted by Christine at 4:55 PM

WOW!! That is quite the adventure!! I hope the time you spent there made up for all the craziness it took to get there!! Looks like you at least stayed at a pretty nice place.

Oh my!!! How frustrating!!!! The hotel looks gorgeous. I forgot you weren't bringing the kids on this one. Can you imagine doing all that with Ashley in tow. That would have been rough for all concerned! :)

Glad you are back. Can't wait to see more pic's after you have got back on to the swing of things.

Oh my goodness! You handled it well! Can't wait to see more pics! I think if I ever make it overseas, I would definitly have to sleep on the whole flight because I am such a contol freak. LOL

Oh wow! I hope you were able to enjoy Spain after all that. Glad to have you back!